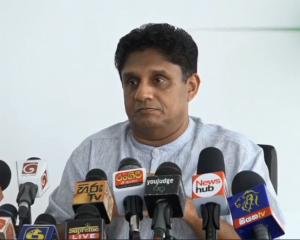 Opposition Leader Sajith Premadasa today claimed that the Government was conspiring to link him with the Election Commission’s (EC) decision to suspend training programme for newly recruited graduates.

Premadasa made these comments during a press conference in Colombo today.

He said the government through troll farms had started spreading the ‘rumour’ to gain a political advantage.

Premadasa claimed that only a fraction of the graduates had received their appointment letters and said the Rajapaksa regime had failed to fulfill its election promise.

The Election Commission Chairman Mahinda Deshapriya had yesterday (4)  ordered the Public Administration, Internal Affairs, Provincial Councils and Local Government Ministry Secretary to suspend the training programme for newly recruited graduates until a week after the election results were published.

Deshapriya had further stated that complaints had been received regarding this matter and that recruiting these graduates would amount to promoting political agendas.

However, Co-cabinet Spokesperson Bandula Gunawardane  during the cabinet press conference today said that the govnemenet’s decision to absorb 45,585 graduates to the state sector was not done targeting the general elections. He noted that discussions will be held with the Election Commission today to sort out the matter.

Speaking further Premadasa said if he were elected he would address the issue in 2 weeks time and make sure that permanent appointment letters were provided within 3 months of coming into power.

August 31, 2021 byAazam Ameen No Comments
Over 50 workers unions and labour advocacy groups called on factory managers, governments and international apparel brands to protect garment workers amid a surge of the Delta variant in Sri Lanka and

November 15, 2021 byNews Admin No Comments
The Government has decided to reopen all the remaining grades in government schools, namely for classes from Grades Six to Nine, from next week, according to Education Minister Dinesh Gunawardena.