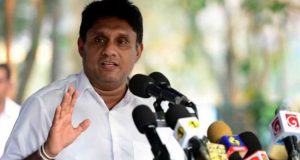 Democratic National Front (DNF) presidential candidate Sajith Premadasa said the only post he had decided so far was the Defense Minster post, which he has promised to Field Marshal Sarath Fonseka.

Premadasa who was speaking at a rally in Dambulla today said he had chosen Fonseka purely based on his capabilities and accomplishments.

He further revealed that as President, he will check if officials were corrupt or had brought disrepute to the country when signing their respective appointment letters.

Meanwhile, Prime Minister Ranil Wickramasinghe at a special press conference today said he will continue to be the Prime Minister, if the DNF candidate was voted into power.

May 16, 2021 byNews Admin No Comments
Legal counsel for the first female Deputy Inspector General of Police (DIG) Bimshani Jasin Arachchi, whose promotion as a DIG has been challenged by a group of senior superintendents of police (SSPs)