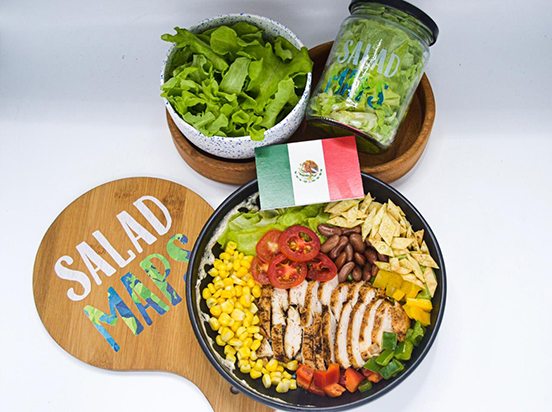 Salad Maps, best known through Instagram for their ingenious marketing with their clever artwork and design, is making their next big move of opening their first physical outlet.

Rishan Thambinayagam, the owner of Salad Maps, shared that the initiative is the first brand under his company Cloud Kitchen (Pvt.) Ltd., and their new premises, housing a state-of-the-art centralised kitchen, will be the next step in setting that plan in motion.

Salad Maps gained its popularity for their highly Instagramable product and, most importantly, their very novel concept of themed salads, which compress the flavours and textures of an entire dish, representing a country famed for that specific item.

Having studied different salad recipes from around the world, Rishan found that the Italian Caesar salad and Greek salads were the most popular, which led him to formulate a similar take on different cuisines from other countries. “I looked into what the most popular dishes are in some countries; if you think of Mexico, you think tacos; Japan, you think sushi; India, you think biriyani.

So what I did was I deconstructed those dishes and made them into salads.”

Currently operating out of his mom’s kitchen, together with Executive Chef Kevin Leon, Rishan appears to be on a winning streak with his decision to employ a rent-free sustainable model (not by choice, it would seem, but they’ve got the new outlet on the way).

The cloud model concept with a centralised kitchen essentially entails the sharing of resources amongst multiple brands. As such, when Salad Maps eventually ends up having to pay rent, they will share the cost among three other brands. Rishan said that by the end of the year, they plan to add six more brands into the mix.

This business model allows the creation of many different brands and a variety of food, devoid of waiters or traditional café/restaurant setups where other overhead charges are to be incurred. The operation will be focused on making the food and investing in high-quality ingredients and packaging.

While hanging out in Rishan’s kitchen, we had the opportunity to try their famous Mexican taco salad (Rs. 690) and witness the prep involved; it was the quick handling of finely diced, good quality produce and scooping it into a jar by Chef Leon.

The salad was fantastic! We have a feeling, however, that just about anyone would vouch for the stellar levels of quality Salad Maps strives to maintain. But like Rishan himself recognised, there is slight difficulty in eating out of a giant jar filled to the brim with food. The issue has been remedied as they are set to soon employ a fully organic lunchbox to package their product for those who find the jar a little too troublesome.

We have to stress on the enormity of the jar, especially considering that most people are unsure of spending around Rs. 700 on a regular jar of salad. We can confirm it is quite big, and possibly enough to split into two meals on a day one is not so famished.

We were also most intrigued by the most expensive dishes on the menu – the Japanese sushi salad and Thai salad. We haven’t given it a try yet, but those who have tried it sing its praise often. Salad Maps also offers a variety of cold pressed juices priced at Rs. 380 for 370 ml (in a glass bottle).

A born entrepreneur, Rishan has come across an ideal business model. With his educational background in business management, he seems well equipped to really drive a business to success, and with Salad Maps becoming highly sought-after on Uber Eats as well, its reach is fast growing.

October 4, 2020 bythemorningeditor1 liberty No Comments
October is Breast Cancer Awareness Month and this year, the Indira Cancer Trust has teamed up with a number of organisations to raise awareness and launch a Touch, Look, Check (TLC) campaign in Sri La