By Revatha S. Silva and Vernon Tissera, in Melbourne, Australia 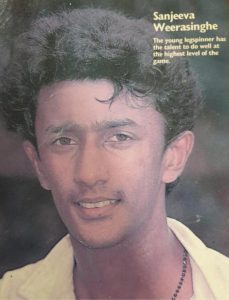 * Tests: Played one Test at age 17 for Sri Lanka in 1985 vs. India in Colombo (the first Test Sri Lanka won). Weerasinghe holds the record as the youngest to play for Sri Lanka in any form of international cricket 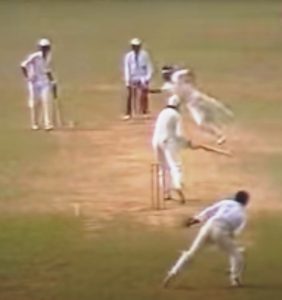 Shehan Karunatilaka published in 2010 the award-winning novel “Chinaman: The Legend of Pradeep Mathew”, which was partly based on the enigmatic career of former Sri Lanka all-rounder Anura Ranasinghe. The leg-spinner Sanjeewa Weerasinghe who played for Sri Lanka in the 1980s in only one Test creates a similar enigma as well as an aura. The Test against India in 1985 is in fact the first that Sri Lanka won. What happened to that “one-Test wonder” after that?

He came and he went. One of the most prodigious schoolboy cricketers of the time, Weerasinghe was never to be seen again in the big league.

The only Test he played in, Sri Lanka recorded their historic first-ever victory, in September 1985 against India in Colombo. The long-awaited win came 12 matches and three-and-half years after they player their inaugural Test in 1982.

The cherished image of Indian Captain Kapil Dev being caught mid-pitch by a diving Rumesh Ratnayake at P. Sara Oval off his own bowling is perhaps second, in terms of its impact, only to the one depicting Arjuna Ranatunga receiving the Wills World Cup from Pakistan’s Prime Minister Benazir Bhutto in Lahore in 1996.

Weerasinghe was an ambitious yet naive 17-year-old schoolboy then, playing for the Isipathana College first-XI cricket team. A natural leg-spinner, as was identified by former Sri Lanka player David Heyn, Weerasinghe went into the wilderness no sooner than he entered the highest echelons. What happened to Sanjeewa Weerasinghe after Sri Lanka’s memorable maiden Test wivtory? Why couldn’t he serve Sri Lanka cricket any longer?

Sanjeewa, now living in Melbourne, Australia with his wife and three children, answers the above questions on behalf of The Morning Sports readers.

Q: What are you doing now in Australia?

A: Since 1997, I have been living here in Australia. I run an academy here. I live in Narre Warren South in Dandenong, Melbourne, Victoria with my wife and three daughters.

Q: On starting cricket at Isipathana?

A: My father and many of his brothers had played cricket for Ceylon Govt. Railways (CGR). One of my brothers also played junior cricket. When I played Under-11 for Isipathana, our Coach David Heyn came to me at BRC (Burgher Recreation Club) grounds and said: “Son, you have a good future as a leg-spinner.”

Ashantha de Mel, Asanka Gurusinha, and Hashan Tillakaratne all played for my school at some stage of their careers. Since 1983 when I was playing for Under-15 age group, I was playing for Isipathana first-XI too. Anura Abeywickrama and Chethaka Rajkumar were the first-XI Captains then. I remember I was the Man of the Match of our annual Big Match against Thurstan in 1985.

Q: How were you got noticed at the national level so early?

A: In 1985, I won the All-island Best Bowler Award and was picked for Sri Lanka Under-19 team against touring Australians under Tom Moody. Gurusinha was our Captain. I remember myself, Rajkumar, and K.G. Priyantha from Isipathana got a call for selections. W.A.N. Silva saw us at the selections held that time in Matara. We all got into the 20-man squad.

The first one-dayer was at Tyronne Fernando Stadium, Moratuwa. Silva was our Coach and Abu Fuard was the Manager. Kapila Dandeniya played that game as the leg-spinner. Moody got a century and we lost that match. I was selected for the second OD (one-dayer). I got the wicket of Moody in my first over, stumped by wicket-keeper Gamini Wickremasinghe. I finished with 1/14 in 10 overs. “Gura” struck a century and we won that match. Then in the unofficial Test of the same series at CCC (Colombo Cricket Club), where Roshan Mahanama was our Captain, I took a match-bag of seven wickets.

Q: Then you got a call for the Test series against touring India under Kapil Dev the same year (1985)?

A: No. I was first selected for the three-day practice match against India played at NCC (Nondescripts Cricket Club). Arjuna Ranatunga was our Captain in that match. There I took five wickets in the first innings, including those of Sunil Gavaskar and Mohammad Azharuddin. In that game, Sumithra Warnakulasuriya scored 160 plus runs and we (the Board President’s XI) took a first-innings lead too. I was not in the squad for the first Test which ended in a draw at SSC (Singhalese Sports Club), but I was picked for the 15-man squad for the second Test at P. Sara.

I can still recall that the practices were held that time at NCC under Coach W.A.N. Silva and Fielding Coach Ranjit Fernando. Duleep Mendis was Sri Lanka Captain then. I was expecting a call for the match. Then I was ready to play in the Test on the first day morning (on 6 September 1985).

Q; Duleep, Roy, Sidath, Ranjan, Arjuna, Aravinda, Rumesh, Ashantha – playing among those top players for your country at the tender age of 17. How was it?

A: Actually I didn’t feel any seriousness about that. It was something like just another school match for me. No pressure whatsoever. All the players treated me really well, particularly Arjuna. They all helped. It was a very happy bunch. We played hard cricket. We always looked to win.

I bowled seven straight maiden overs to Gavaskar who had scored over 9,000 Test runs by that time. My figures in the first innings were 16-7-28-0 and in the second, I didn’t bowl much (3-1-8-0) because it was a fast track. Rumesh and Saliya Ahangama bowled brilliantly and we won by 149 runs. 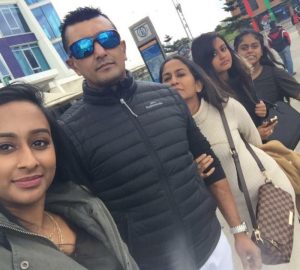 Sanjewa Weerasinghe now with his family in Melbourne, Australia

Q: Sri Lanka thus recorded their much-awaited maiden Test victory and you were part of it. Your thoughts?

A: I remember Rumesh taking that diving catch to get out Kapil as the India last wicket. I was usually fielding at cover-point. It was a different era altogether. Now I see the footage on YouTube and notice that I run across the pitch after the catch back to the pavilion.

President J.R. Jayewardene declared the following day as a National Holiday to celebrate the historic victory. Yet I can’t remember whether even my father had come to watch the game. My sister was there watching that match at the ground on the last day.

(There was only live radio commentary of the match. Live TV coverage began only after last day’s tea break when Sri Lanka needed to take three more Indian wickets in the final session of play to win the game.)

Our Cricket Board President that time, Mr. Gamini Dissanayake, gave us a grand dinner in his residence that day (11 Sep. 1985). It was Champaign all over.

The Maharaja Company offered every player a special medallion which I still wear in my neck. A small sum of money was presented too. Nobody played for money back then. The country came first.

Q: How do you look at that Test now?

A: We had a great and well-knit side. Sri Lanka always dominated at home. The Sara pitch was a very slow turner then and it had been specially made for pace in that 1985 series. It worked for Sri Lanka.

Q: What happened thereafter in that India series?

A: I was dropped in the third Test played at Asgiriya. I was the 12th man. Roshan Jurangpathy made his debut in that match. We drew it and beat India 1-0 in the three-match series. That happened to be the first-ever series victory as well for Sri Lanka in Test cricket.

Q: Then you travelled to Pakistan in October the same year with Sri Lanka for their very next series?

A: Yes. Roger Wijesuriya (the left-arm leg-spinner who played in four Tests between 1982-86, taking only one wicket with a strike-rate of 586.00) was the other spinner in the side. I was not played in the first Test held in Faisalabad. Roger played.

But the night before the third and final Test in Karachi, I was asked to get ready to play. 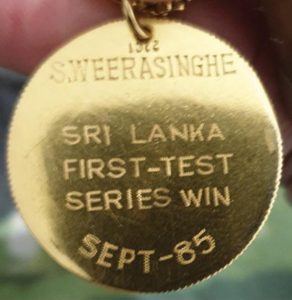 Then in the morning, I found that I had been omitted and Roger was to play again. I felt it was a mistake. It was a heavily turning wicket. I thought I could have broken a record that day, had I played. I had a great opportunity but I missed that. It could have been the turning point in my career. (Wijesuriya took his career’s only wicket, that of Abdul Qadir, in that third Test, bowling 25.3 overs for a match-bag of 1/77).

Q: And you never played again for Sri Lanka?

Q: Looking back, what do you think are the reasons for not getting a recall for Sri Lanka full team?

A: There are many reasons. Later on, a Coach named Don Smith changed my bowling action. And I took a wrong decision to play for Bloomfield when all the top players played for clubs like NCC and SSC. In those clubs, I could have had a better chance to get selected. My father and his brothers had played for Bloomfield but the club was not doing really well then. Actually, I think I was not mature or experienced enough then, to make the right decisions.

I continued to play first-class cricket and did well as an all-rounder. I contributed to my club win the Sara Trophy. In 1990, I went to Bangladesh to play the Dhaka League. Then I played in Malaysia where I played for Ipoh. In 1996, I came to Australia with Rumesh Ratnayake and settled down here.

Q: Now being a Coach yourslef, how do you assess your cricketing past?

A: I am happy and content. You need luck also to sustain at the international level. I am happy to have represented my country and to become the youngest ever to do so.

The situation was different those days. I don’t blame anybody. It is cricket that gave me everything. Today, I live happily with my wife and three daughters in Australia because of cricket. Now as a professional coach, I intend to make good cricketers for the future. 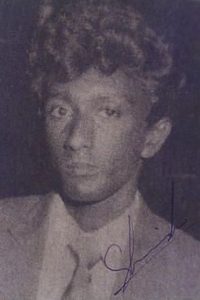 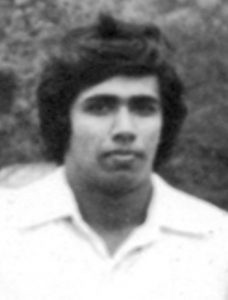 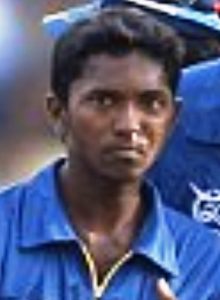 * Sanjeewa Weerasinghe is still the youngest to play for Sri Lanka in all three formats, Tests, ODIs, or T20Is

* The second youngest to play Test cricket for SL is Arjuna Ranatunga who was 18 years and 78 days when he made his debut vs. England at P. Sara on 17 February 1982, which was the country’s inaugural Test. He is still the 48th in the world’s youngests’ list

* The third youngest to play Test cricket for Sri Lanka, and the 49th in the world, is Roshan Jurangpathy who was 18 years and 81 days old when he made his debut vs. India in Kandy on 14 September 1985. That was incidentally the very next (third) Test match of the same Indian series where Sanjeewa Weerasinghe made his debut

* The 21st in the youngest players’ list for ODIs in the world is Ravindu Gunasekera who is of Sri Lankan origin. He was 16 years and 347 days old when playing for Canada vs. Bermuda in Ontario on 1 July 2008

* The 120th in the youngest players’ list for T20Is in the world is Tharindu Perera who is also of Sri Lankan origin. He was 18 years and 318 days when playing for Botswana vs. Uganda in Kampala on 20 May 2019