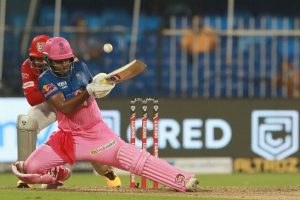 Sanju Samson during his amazing match-winnning knock for Rajasthan Royal in the 9th match of the current IPL, played against Kings XI Punjab

There is a song released on January 13, 1964. The lyrics obviously were composed before that. Sanju Samson was born 30 year later. And 26 years after that, he played an innings which was akin to offering proof of a prediction embedded in the song.

The song: ‘The times they are a-changing.’ The lyricist and singer: Bob Dylan. The line: ‘the slow one now will later be fast.’

Well, times have changed since 1964 as far as cricket is concerned. No ODIs, no World Cups, no T-20s, no Dilscoops or switch-hits, no third umpires or match referees.

Now we’ve seen amazing performances with bat and ball over the past 56 years. Standout performances. All time ‘greats’ if you will. Amazing turnarounds such as Kusal Janith Perera’s innings-of-a-century 153* against South Africa in the Durban test, January 2019. We have seen one-gem wonders too. Nevertheless, the gems do shine and their luster fades slowly.

Samson then carted Glenn Maxwell for 21 runs inclusive of three sixers. Over No 16 turned everything upside down, or it seemed that way, but he’s out the first ball of the next over and it is heartbreaking, obviously, for the Rajasthan Royals. Despite two boundaries by Robin Uthappa in the last two deliveries, the asking rate had climbed back to 17.00/over.

Over No 18. Tewatia clobbers Sheldon Cottrell for 30 inclusive of five sixers! The ‘slow one’ had gotten ‘fast.’ The asking rate was now a highly manageable 10.53/over. The Rajasthan Royals made it with three balls to spare, Tewatia finishing with 53 off 31.

The ‘how’ of it is of course a question that lends itself to multiple answers. Maybe they were ‘slowly’ getting a measure of the bowlers and the wicket. Maybe they were pinned down by good bowling one over and allowed to vent by wayward stuff in the next. Maybe Samson (and later Tewatia) went mad or, put another way, Maxwell (and later Cottrell) lost their minds.

Whatever it is, this much can be said: Tewatia and Samson put up quite a show. Not one that deserves the tag ‘one for the ages,’ for these kinds of fireworks can be seen at least a couple of times in any IPL tournament.

What’s important, perhaps, is the ‘it is possible’ element in all this. The ‘never give up,’ and, as far as the other side is concerned, ‘never be complacent,’ viz the old adage ‘it’s never over until it is over.’

Crazy. Crazy cricket. Crazy sports. Unbelievable. For all the downs of commercialization, the sourness of performance enhancing drugs and match-fixing, we have the occasional Samson and Tewatia. We feel good. As spectators. For aspiring cricketers and indeed aspiring sportsmen and sportswomen, there’s a lesson here.

Mathivanan camp withdraws from SLC election: We feel that our attempts will come to naught

May 19, 2021 byRevatha No Comments
Mathivanan camp withdraws from SLC AGM