Santhul – A cricketing star in the making

Santhul Wijeyarathne, a 10-yearold Nalandian, is a rare talent in cricket, who recently took four wickets in four consecutive balls. He excels in both bowling and batting and was recently named the Best Player in the Under-10 group at the annual cricket competition organised by the Sanath Jayasuriya Cricket Academy.

Santhul, tell the Little Stars fans about yourself.

I’m Santhul Wijeyarathne. I turned 10 years old last May. I’m a proud Nalandian. My biggest hobby is playing my favourite sport – cricket. I have four members in my family – father, mother, and elder brother. My brother is also a Nalandian and he is a cricketer too, playing for the Nalanda Under-15 cricket team. I have many friends; Disura, Dinula, and Rachintha are among the best. Other than cricket, I like travelling and watching sports on TV.

How did you feel after taking four wickets in four consecutive balls?

Do you play other sports?

Who is your favourite cricketer?

My favourite cricketer is Kumar Sangakkara. He is also a left-hand batsman like me. I love his attacking and watchful style of style. He is a legend.

Yes. I concentrate on bowling, batting, and fielding. I think that to become an all-rounder, it is important to train hard in all three areas.

You are the youngest member at the Sanath Jayasuriya Academy to ever score a century. How were the responses you received and how did you feel about it?

It was one of the happiest moments for me. I was nine years old at that time and it was against a good bowling side from Colts Cricket Academy. I was hitting all over the grounds and I had scored 16 fours. After scoring a century, my coaches told me I’m the youngest to score a century for the Sanath Jayasuriya Academy. I got many wishes from my friends after hitting a century.

Tell us about your training schedule. How do you balance your time between practices and studies? I have practices at the academy and also at school. I train at least three to four days a week. I do my work at school well and I always get high marks at exams. I study hard at school and also study at home after practice sessions. I always divide my time well between cricket and studies.

How important is teamwork to win a cricket match?

Teamwork is very important in cricket. All members in the team must do well in order to win matches. Only one member or a few members doing well is not enough. In addition, all the team members must help each other when playing a match. Now, I’m sometimes made captain of my team and I always get to help all my teammates win matches.

What are your other interests?

I like western music, watching TV, and playing with my friends and brother.

What is your ambition?

My ambition is to be a cricketer who represents Sri Lanka.

Who supports you in bagging all these achievements? 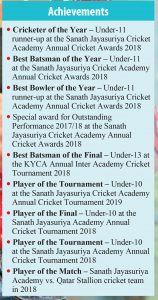 My parents help me a lot and my brother always helps me and gives me advice. My grandfather always takes me for practices and matches. My grandmother also comes to see all my matches. Sanath Jayasuriya sir and all the coaches in the academy help me a lot too and train me hard, especially Chamara sir and also Tharanga Dhammika sir who is also an old Nalandian. They teach me and train me on a lot of cricketing techniques and also how to behave as a cricketer. When I’m not playing well, they always help me score runs and take wickets. I’m especially thankful to them. Now all my coaches at Nalanda Vidyalaya are teaching me cricketing techniques and helping me to do well.

Mention one unforgettable moment in cricket for you.

There was an Under-13 tournament organised by KYCA and the final match of the tournament was played in Ragama between the Sanath Jayasuriya Academy and a school team from Kelaniya. The other team in the final batted first and our academy was to get more than 120 runs in 20 overs. We lost five of our good players to scores below 50 runs and finally, my brother and I joined in the middle to bat. We were going to lose that match, but my brother started hitting sixes and fours. I also supported him well. We both had a strong partnership and won the match in the final over. This is the first time I played a match with my brother. I became the Best Batman of the Final and my brother became the Man of the Final. This was an unforgettable moment in my cricket life.

September 2, 2019 byPavani Jayasinghe Munagamage No Comments
Tesara Iddamalgoda, going by the username @tesaarah, has over 13,000 followers on Instagram. Currently studying at Monash University in Malaysia, Tesara is pursuing her Bachelor of Business and Commer

The sky is not the limit