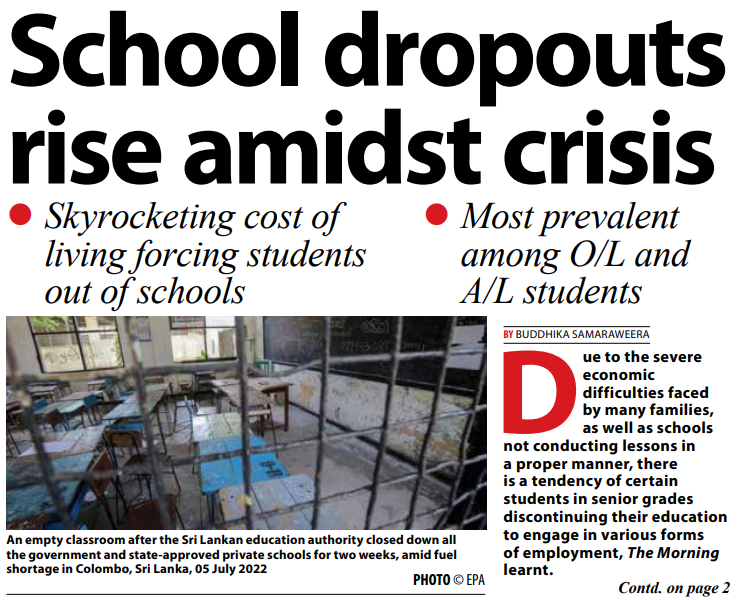 Due to the severe economic difficulties faced by many families, as well as schools not conducting lessons in a proper manner, there is a tendency of certain students in senior grades discontinuing their education to engage in various forms of employment, The Morning learnt.

Sources told The Morning that that in the current situation, many families are facing severe economic difficulties and the students from such families are unable to continue their education, and that this is seen mostly among students who are scheduled to appear for the General Certificate of Education (GCE) Advanced Level (A/L) this year. It is said that the main reason for certain students turning to jobs is that their parents have lost their own jobs, leading them to be unable to bear household expenses.

According to sources, most of the students turning to jobs are engaged in various daily-wage jobs in or near the areas they live. It is also reported that certain other students, especially those living in remote areas, have resorted to earning money through various informal means, such as sand mining, instead of formal employment.

When asked about this, Ceylon Teachers’ Union (CTU) President Priyantha Fernando, who leads a trade union representing school teachers who are constantly interacting with students, told The Morning that the union has been alerted about incidents of A/L students ceasing their education in lieu of employment.

He said that this situation has been fuelled by the loss of livelihoods of many people who live in provinces such as the North Central, North, Eastern, and Uva provinces given the prevailing situation, their income becoming very low, and the fact that schools are not being conducted in a proper manner due to the fuel shortage.

“This is a tragic situation. Only about 50% of the students who appear for the GCE Ordinary Level (O/L) Examination are qualified to appear for the A/L Examination. If students leave their education and do not sit for the examination in this manner, it will bring adverse results in the near future. Therefore, the Government, mainly the Education Ministry, should look into this matter as soon as possible,” added Fernando.

Minister of Education Susil Premajayantha was unavailable for comment on the matter.

Given the Covid-19 pandemic situation, schools island-wide were closed on several occasions in the past two years. Despite the Government’s efforts to carry out teaching activities online, given the school closures, teachers and parents were continuously charging that the Government had not provided the necessary facilities for teachers and students to teach/learn online. Furthermore, due to the continuous strike launched by the teachers’ and principals’ trade unions demanding solutions to the teacher-principal salary anomaly issue from mid-June to August 2021, the activities of the schools were hindered. Schools were also closed for several weeks due to the fuel shortage in the country and the resulting transportation crisis. Even though the schools have now reopened, teachers and students constantly complain that it is very difficult to procure transport facilities to travel to the schools.

July 7, 2022 byNews Admin No Comments
Health Services Director General Dr. Asela Gunawardena warned that the threat of Covid-19 is not completely eliminated yet, and that there is a risk of re-emergence of the virus with new variants.