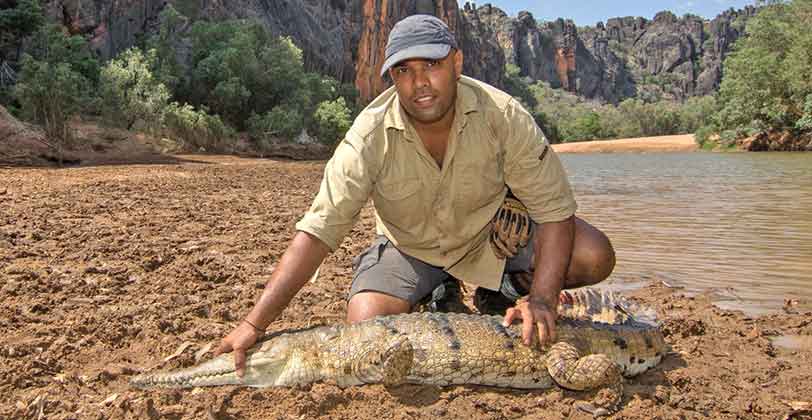 June 14, 2020 by Dimithri Wijesinghe No Comments

Ruchira Somaweera, a Sri Lankan herpetologist (a zoologist who studies reptiles and amphibians), recently launched his YouTube channel “Science with RU”, amassing a considerable viewership consisting of Sri Lankans across the island.

Well known for his contributions in Sri Lanka, Ruchira currently lives in Australia where he is involved in multiple projects. While working with the Australian National Science Institute (CSIRO) mentoring several PhD students as well as doing field work for various projects in association with National Geographic and numerous others, he has decided to embark on a brand new YouTube journey in his near-nonexistent spare time.

Launch of the channel

The channel was originally launched in the hopes of busting popular myths and debunking myths about nature and wildlife that continue to hold sway in Sri Lanka. He said that like everywhere else in the world, in our country, there are endless beliefs and folklore which incite unwarranted killings of reptiles. Among the most misunderstood groups of animals in Sri Lanka are snakes, many of which are falsely believed to be venomous or aggressive and as a result, are often killed on sight.

Ruchira shared that he wrote multiple books on reptiles which address such mythologies, and he has always had an interest in sharing how these beliefs can be explained through science to the general public. Following the Covid-19 shutdown, he finally found some time to get started on reaching people through a different platform such a YouTube.

“It is really a low-end production by necessity as it is my 4.30 a.m. project that I do because of a personal interest,” he said, adding that the only way it can be sustainable is if it remains a low effort. On a logistical level, that is the best he is able to do right now.

Reaching out to many, consistently

The programme is conducted in Sinhalese, the reason being that the people he wished to reach with this information would essentially be limited if he did it in English. The structure of the show is: Ruchira hosts a discussion with fellow scientists in Sri Lanka, each an expert in their respective field, to tackle the myths in easy-to-understand language. He said that he has been able to reach out to his peers and colleagues who were either schoolmates or university batchmates who are experts in their respective fields to discuss and shed light on misconceptions through science.

As his channel has grown, the content soon started to evolve and Ruchira said that currently, he has projects with five continents, allowing him a lot of travel to many different locations; often in his travels, he would take short video clips for his own interest and recently, a Sri Lankan friend who saw the clips had suggested that he will put them together to create something cohesive to share on his channel.

Since then, Science with RU has been featuring two sections: “Fiction to Fact” and “On a Critter Hunt”, the latter of which consists of clips from the field of various reptiles he has encountered. He said that he is hopeful this would encourage early researchers and university students to be inspired to go into the field.

Speaking about the current success of his channel, he said that it really isn’t big on numbers but he believes it has reached those who will benefit from it. Sharing that while there are plenty of videos online of people sharing their opinions with regard to these myths and reptiles, he wished to add to the conversation from a subjective and scientific point of view, and involve people in a conversation with professionals who are actual authorities on the subject.

Asked about the possible growth and expansion with regard to his series, Ruchira said that NatGeo has shown interest in making it a regular series, rather than have it being discussed. They would want to go in the field and showcase these topics, but he said this is far down the line.

For now, the feedback he has received has been fantastic. He shared that his alma mater, Trinity College, has contacted him and proposed that the students take on a project where they add subtitles in English and Tamil for the videos as an activity. Ruchira said that this is a great initiative as adding subtitles would require the students to go through the material discussed in the videos and therefore they would end up learning about the topics.

Additionally, Ruchira’s two wonderful children are currently hosting a YouTube channel named “Backyard Creatures” with his assistance, where they explore their surroundings and discuss the various creatures they encounter. Ruchira said that several schools have circulated the videos and it has been promoted on NatGeo.

“I have received messages from parents, (one of whom) shared that their child, who would otherwise never spend time outside, wanted to make a video of a bird that came to his backyard and send it to me,” he said, sharing that “these are the sparks” that inspire another younger generation to get into science.

“It is far more convincing to see either your peers like two kids your own age or myself talk about these topics than a television presenter who is paid to do a job,” he said, and so the formula appears to be quite ideal.

As for the future of Science with RU, Ruchira shared that he did not by any means start it with the intention of becoming a “YouTuber” and so it will have to remain in this sustainable format, where he shares information at his own pace and style. However, he hopes that it continues to reach those who need to hear and see it, and he will continue to do it as more than anything, it serves him the self-satisfaction of sharing his passion and knowledge with anyone who cares to listen.

April 19, 2020 byJennifer Anandanayagam No Comments
Yasodhara Pathanjali is well known in Sri Lanka for being an incredibly creative artist and designer, blessing us with wonderful creations upon which our eyes and minds can feast. A fact that might be

April 12, 2020 byJennifer Anandanayagam No Comments
The Kelani River – a victim to many pollution activities – is also said to have seen a significant improvement in these weeks of lockdown. Could this really be nature's way of reviving itself and taki