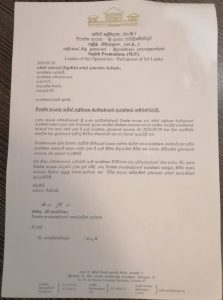 The request to improve the security detail afforded to Opposition Leader Sajith Premadasa is yet to be attended to, The Morning learnt.

The request was made following an incident that occurred at the Mount Lavinia Police Division on 29 September where Premadasa, who is the Leader of the Samagi Jana Balawegaya (SJB), and his team faced a stone pelting episode when they visited the area to address their party supporters and announced their stand on the proposed draft 20th Amendment to the Constitution.

Jayawardana had further noted that given the Opposition Leader’s position and increasing frequency of public engagements, he will require a larger security detail than he is afforded.

When The Morning contacted the Ministry of Defence to inquire the action they are taking over the request, we were informed that the request should go through the police Ministerial Security Division (MSD) Unit which would then send it for the approval of the Ministry of Defence, after assessing the situation and deciding on the actual requirement to increase the security detail for the Opposition Leader.

September 27, 2020 bythemorningeditor1 liberty No Comments
Sri Lanka Cricket (SLC) reiterated that it would follow all Covid-19 guidelines for the Bangladesh cricket team which is scheduled to arrive in Colombo in late October.

June 8, 2020 byTSM Web Desk No Comments
The Ministry of Education is to make a final call on whether to postpone the Advanced Level (A/L) and Grade Five Scholarship examinations scheduled to take place in August after a decision is made on