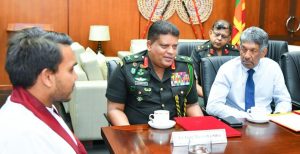 Sports Minister Namal Rajapaksa (on left) and Arjun Fernando (right) look on as Lt. Gen. Shavendra Silva elaborates a point at the meeting where the National Sports Selection Committee was appointed by the new Minister on Friday (2) in Colombo

Can the new sports selection procedure work smoothly? The newly appointed five-member National Sports Selection Committee (NSSC) will have a monumental task. The all-important sports selections in the country, with regard to both the selection panels of the respective sports associations as well as the sports squads and teams, are left for the NSSC which Youth and Sports Minister Namal Rajapaksa appointed on Friday (2). Will it hamper the already existing system of national sports selection? – So asked some of the persons whom ‘The Morning Sports’ talked to, yesterday.

The new NSSC is headed by Commander of the Army / Chief of Defence Staff / Head of the National Operational Centre for Prevention of Covid-19 / member of the National Sports Council, Lieutenant General Shavendra Silva.

The new NSSC has central powers with regard to national sports selection as it was mentioned in the extraordinary gazette No. 2194/54 issued on 23 September.

The NSSC is vested with the power to conduct inquiries and investigations and to make recommendations with reference to all appeals or complaints received by the national selection committee at the end of the selection trials of all national sports associations.

Other powers vested with NSSC

In addition to the above, the Sports Minster has earlier explained that all national sports selection should have final ratification of his National Sports Council (NSC), appointed on 20 August and is headed by Mahela Jayawardene.

Now sports associations / federations will have to send the names of their selection committees much earlier for ministry approval because it has to go through the NSSC and then the NSC. They might have to send in the names before at least a month earlier to get the final ratification. Will that be practical in a sport like cricket and athletics? Within weeks situations changes in sports so that selections will have to adapt to those changes of situations rapidly.

“I don’t think it is practical in cricket. The selectors might have to send the names of the final squad about one month before a series. It won’t be practical,” one of the former cricket selectors who is privy to the ongoing changes told us yesterday.

Lack of any cricketing rep

The workload for the NSSC will be too heavy that such busy professionals like the Army Commander will have their work cut out. The item 6 (1) of the 23 September gazette (“A database on the details of the athletes of all national pools should be prepared, updated and maintained by the National Sport Selection Committee”) alone is a complex task which the NSSC will have to do a lot of delegation for.

“The three out of five gentlemen of NSSC are from a tennis background. What we have in Sri Lanka is more a strong cricket and athletic culture. Therefore how they are taking quick decisions on both those key sports will be an interesting prospect. You cannot have reps from all sports there (in NSSC) but someone who knew cricket would have been a must,” another sports veteran said.

A Quote from a Legend: Today a saying from Steve Waugh

January 2, 2022 byRevatha No Comments
A quote from a sporting legend

Mathews out of Protea Test tour