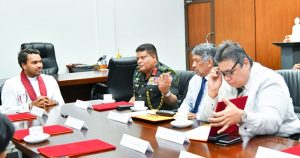 The local sports authorities are yet to officially announce the names of the new three-member national men’s cricket selection panel as Sri Lanka team is to start their tour of West Indies on Tuesday (23), less than four days from now.

“I don’t think you can ever expect this type of pathetic situation in any other country,” said an inside source who is in the know of the ongoing proceedings related to the appointment of national selectors.

Pramodya Wickramasinghe, Romesh Kaluwitharana, and Hemantha Wickramaratne were tipped to be named as the next national selection panel but at least three camps are reportedly competing to influence the authorities, insisting not to appoint some of those names while pushing new names, allegedly of their proxies.

“There are various types of committees appointed by the Sports Minister (Namal Rajapaksa). The selection process has become more complicated and difficult. Too much committees has messed up the whole process,” he added.

The previous national cricket selection committee was dissolved after its Chairman Ashantha de Mel resigned on 27 January. That was two days after Sri Lanka lost to England 2-0 in a two-match Test series in Galle. The other two members of the committee that time were Wickramasinghe and Chaminda Mendis.

There are speculations that outside channels are worried about some of the nominees –particularly Wickramasinghe— fearing they would jeopardise their chances of influencing selections.

About seven names in fray

By yesterday, names of former national players Amal Silva, Brendon Kuruppu, and Kapila Wijegunawardene too have been entered into the fray further causing the deadlock. Particularly Silva’s name was having a strong support from some parties, it was said yesterday.

Some names have been allegedly suggested from outside the cricket board. Previously it was reported Sri Lanka Cricket (SLC) had nominated seven names in all, including that of Waruna Waragoda.

“The cricket board has given some names to the Sports Ministry. Now there is National Sports Council (NSC). Further, there is the National Sports Selection Committee (NSSC). Then there is a newly-appointed Cricket Committee,” the source explained.

A Cricket Committee too

“There is also a Cricket Committee which has been vested with strong powers. And there could be influences on the Sports Minister too, from various outside parties. Obviously the process has become more complicated. The influences could be so many. Why then otherwise that there is so much of a delay,” asked the above source.

“There are players too at the moment who use their political clout to put their people in the panel. They seem to have the impression that if some selectors are to be appointed, them playing in the side could be tough. It’s a situation where players selecting their selectors,” he quipped.

“The system has become so fragile that there can’t be any appointment on merit,” he explained, adding “If the decision-makers are prone to succumb to pressure so much, how can we expect the country to win.”

The source further explained saying “if Sri Lanka are to do badly in the West Indies, then the whole blame will come to the Board and the Minister”.

“All other influencers will wash their hands off. This is a pathetic situation in our cricket,” he further added.

Sri Lanka are to begin a month-long cricket series, across the three formats, in the Caribbean island of Antigua and Barbuda from 3 March.

Australia hold out for draw

August 19, 2019 byRevatha No Comments
In a match featuring such high drama, there had to be a twist or two