Selectors to go for youth amid protest from senior official 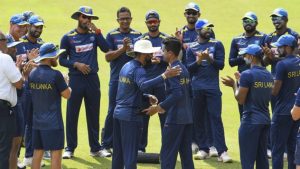 * Selectors and the Board on a collision course?

* Dimuth to be available for selection

* KJP to miss series, Wanindu too out due to injury

* Two visions in the pinnacle is not ideal to the structure

Sri Lanka national selection committee, headed by Pramodya Wickramasinghe, are to play some young talent in the national side whilst the Sri Lanka Cricket (SLC) hierarchy, especially one of its senior vice presidents, is allegedly lobbying against this ‘youth policy’ of the selectors.

This is before the forthcoming three-match One-Day International (ODI) series, country’s first international assignment for year 2022, starting in Kandy on 16 January.

The Sunday Morning reliably learnt that the selection panel of the national senior side, which also includes Romesh Kaluwitharana and Hemantha Wickramaratne as the other two members, are hoping to include the youngsters who are knocking on the door.

Some names of those youngsters, who may probably be included, are Kamil Mishara, Sahan Arachchige, Sandun Weerakkody, Sadeera Samarawickrama, Ashen Bandara, Praveen Jayawickrama, and Suminda Lakshan.

Yet the board hierarchy is allegedly adamant that they should continue to play the usual combination of players for the Zimbabwe series as well.

“It is a clear conflict of the visions of the two parties. The Sri Lankan team and its future will be affected if the selectors and the board do not come to an agreement on how the composition of the nationals team should be,” said an SLC ex-co member on the condition of anonymity. 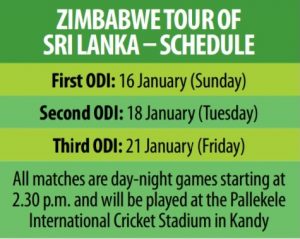 “Or else, the board should give total independence to the selectors to choose whom they like and let the selectors work according to their own vision,” he remarked.

Zimbabwe are currently ranked 14th as Sri Lanka are in the ninth place, according to present International Cricket Council (ICC) country rankings. The next World Cup of the ODI format is due in India during October-November 2023.

Perhaps a blow on the “playing the same combination policy” of the board, two permanent fixtures of the Sri Lanka ODI side, Kusal Perera aka KJP and Wanindu Hasaranga are likely to miss the Zimbabwe series due to injury.

Another injured veteran, Angelo Mathews’ availability for the pre-series fitness test on Friday (7) was not certain until yesterday.

This means the selectors will get clear space in the squad to be filled with some new faces.

Dimuth to be available for ODIs

As questions are being raised, from many quarters, about the captaincy capability of Dasun Shanaka in both the short formats – the ODI and T20 International – his predecessor Dimuth Karunaratne is likely to return from a current visit to U.S.A. in time to face Friday’s fitness test.

Shanaka has been under scrutiny for lack of runs with the bat and wickets with the ball, after he was elevated to Sri Lanka white-ball leadership last July, making his captaincy look a liability. His critics have suggested bringing back Karunaratne at least for the ODIs as the Captain will bring back stability and control in the side, the qualities which have allegedly been scarce under Shanaka’s leadership.

“There is a push from the board to reappoint Dimuth as the Captain. But the selectors are unlikely to decide to fire Shanaka, at least sooner,” revealed the above source.

“In addition to Shanaka’s lack of form, he is not the most popular captain either. One cannot say he gets the 100% support from his team,” the source further revealed.

“But in this case, the selectors’ vision is clearly set on the 2023 World Cup. Zimbabwe cannot anyway be considered a really strong opposition. Yet they are unlikely to experiment with the captaincy now,” he pointed out.

“Anyway, if the board does not work in unison with the selectors, it does not auger well for the game. On the part of the board, its officials interfering into team selection is no way acceptable.

“There were recent reports in the media that the selection committee members had been paid one million rupees each by the board after the T20 World Cup last year, perhaps as an incentive. It can one way be deemed an indirect way of taking the selectors under your control,” explained our source.

Meanwhile it is also learnt that Mahela Jayawardene, who assumed duty as Sri Lanka team’s Consultant Coach yesterday (1 January), had expressed his reservations about team selection during last year’s World Cup where Sri Lanka failed to reach the knockouts.

It is also understood that Shanaka is carrying an injury himself and Friday’s fitness test could be a challenging one for him. If he fails, the selectors may go with Charith Asalanka as replacement skipper.

Our effort to get the views of selection committee chairman Wickramasinghe on the above developments proved futile last evening.

November 12, 2018 byRevatha No Comments
Suranga Lakmal, Sri Lanka Captain in place of an injured Dinesh Chandimal has won three out of three Tests so far as skipper.

Bayern hold off Wolfsburg to stay on top

April 20, 2021 byRevatha No Comments
Atletico and Sevilla with win