* A senior cricketer manipulates his report before Windies tour

* No wonder they lose by sending unfit and rogue players

* Are the authorities sleeping?

* Or, every thief saves the other thief in an ugly, vicious cycle? 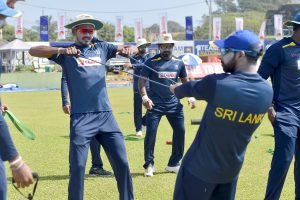 A veteran player who holds a great responsibility in the shorter formats of national cricket has manipulated his fitness report, allegedly by bribing the related officials, The Morning Sports reliably learnt on Tuesday (19).

The player, who has been on many occasions involved in ugly social media spats with his own team-mates in recent times, had altered results of at least two main categories in his fitness test report, a Sri Lanka Cricket (SLC) source who closely monitors the proceedings of those tests told ‘The Morning Sports’.

Early this week fitness tests were done by SLC in Colombo reportedly with an aim to pick the final squads for the second England Test match in Galle and the forthcoming West Indies tour where Sri Lanka are to play three Tests and a couple of ODIs as well as some T20Is.

“The (SLC) officials need to look into the matter and punish the culprits who are responsible for this kind of dangerous corruption. At the end of the day these unfit players get selected to represent the country and there is no wonder they are performing poorly in both home and abroad,” the source said.

“This cannot happen anyway in a professional setup like India, England, or Australia. This can never happen in any other Test-playing country. How are these players surviving scot free by doing all those dirty things,” asked the above source.

Reportedly at least eight of the SLC contracted players out of about who underwent the above rounds of fitness test 20 in Colombo have failed it.

Those who have failed the tests include some permanent members of the Sri Lanka side, it is further learnt. Those players have now been given an ultimatum to redo the tests on 3 February.

But the above-said veteran would not have to face a re-test because he has already passed it by manipulating its results.

Local media reported early this week that senior cricketers of the Lankan team have manipulated their reports by offering various kinds of bribes –food and drink included—to their SLC-appointed physios and trainers. SLC is yet to respond to that allegation.

After the second Test in Galle starting tomorrow ((22), Sri Lanka will tour to the West Indies for long series which will include two Tests, three ODIs, and three T-20s.

March 4, 2019 byRandev No Comments
The Pakistan blind cricket team, which is on a tour of Sri Lanka, has been stranded in the island nation due to the closure of Lahore airport.