February 17, 2021 by Dinitha Rathnayake No Comments

Deputy Inspector General of Police (DIG) Bimshani Jasin Arachchi was appointed as the first ever female DIG in Sri Lanka in October 2020. She graduated from the University of Ruhuna with a Bachelor of Arts (BA) degree in Economics, Sinhala, and Statistics. She later obtained a Masters in Human Rights from the University of Colombo. In 1997, Jasin Arachchi joined the Sri Lanka Police Department as an Inspector of Police and was promoted to Senior Superintendent of Police (SSP) in 2017. She has been serving at the Bureau for the Prevention of the Abuse of Children and Women of the Sri Lanka Police since 2010. DIG Jasin Arachchi was appointed as the Head of the Police Welfare and Medical Services Range by the National Police Commission (NPC) and currently she is working as DIG Police Ombudsman Range at the Sri Lanka Police. 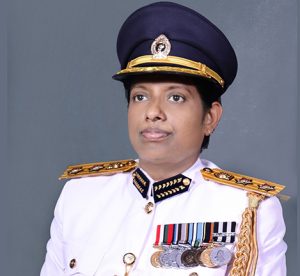 The Morning interviewed DIG Jasin Arachchi regarding her experience after being appointed as Sri Lanka’s first-ever female DIG.

Below are excerpts of the interview.

Did you face any challenges after your appointment as Sri Lanka’s first-ever female DIG?

I was appointed as a DIG on 8 October 2020, and as the Head of the Police Welfare and Medical Services Range. I was given the responsibility of handing over a report on Police officers who were affected by the Covid-19 pandemic situation. For this, I had to visit Punanai, Kundasale, Habaraduwa, and Kalutara. This was like a target given to me after my appointment and within three days I had to hand over this report with photographic evidence. None of the officers in the operational units were willing to do this job. I had to travel at midnight to visit Covid-19 centres. I took this up as a challenge. However, this was the starting point of making me uncomfortable in my position and I think that it was purposely done.

Who asked you to make this report?

The Inspector General (IG) of Police.

What did you do afterwards?

I was able to establish a 24-hour operation unit which took care of the welfare of the officers infected by Covid-19 and obtained medical equipment worth Rs. 13 million for the Police Hospital. But from the day of my appointment as DIG, I had to go through a difficult time where everyone tried to make my life difficult. Without any reason, two months after my appointment, I was transferred to the Ombudsman Range at the Sri Lanka Police and never given the opportunity to handle Women and Children Affairs Range, where I was having a lot of activities with the Bureau for the Prevention of the Abuse of Children and Women of the Sri Lanka Police.

The Sri Lanka Police received a total of 20 invitations to participate for the Independence Day celebrations but I was never given the opportunity to take part in that occasion. I also had to reject media invitations that I received.

I was also invited to participate in the celebration of 50 professionals in Sri Lanka but they did not allow me to participate. However, Minister of Public Security Rear Admiral Dr. Sarath Weerasekera intervened in this matter so finally I was able to participate at the last minute.

Further, I requested an official Police quarters from Colombo due to the travel that I had to undertake, but the Police never offered me one.

Are you satisfied with the support given by female Police officers in senior ranks?

No. Specifically, there is a lot of discrimination, starting from female SSPs. However, officers below the SSP rank have a very good professional connection with each other. I think that this is due to their desire for positions.

Is it difficult for you to handle your position as the DIG Police Ombudsman Range at the Sri Lanka Police?

No, it is not. I am very good at handling complaints. Usually, I deal with complaints which I receive from Police officers. I am satisfied with the work I am doing. But I regret the fact that I was not given the Women and Children Affairs Range since any female DIG would want to handle that Division.

How was the response from the public after your appointment as Sri Lanka’s first-ever female DIG?

I think that they were happy, and they respected and appreciated this decision. I hold the third senior position within the Sri Lanka Police, where the responsibility is huge. Everyone expected a change in the Women and Children Affairs Division. I think that this is why the public appreciated this decision. But, after a few days of my appointment, I realised the true nature of senior Police officers. I am not talking about all of them but there were some who wanted to stop me from doing my job. The public wanted me to go out of the box and do something different.  Even if I am capable of that, I have been stopped by some parties. I have a lot of disappointment about that.

Do you mean that the Police Department has something to do with this situation?

Yes, the Police Department tried to keep control over me. I think that senior officers should support one another. They should give counsel to show the correct path. The public also raises questions as to what the first female DIG has achieved. I am capable of handling Women’s Affairs. It is not new to me and I know that I can make a major change in this sector using my knowledge. Even the Minister Dr. Weerasekera advised me to get involved in Women’s Affairs which I have never been given a chance to do.

Tell me about your qualifications and what you did to be appointed DIG?

Having 24 years of excellent job experience, during which my work for the Bureau for the Prevention of the Abuse of Children and Women of the Sri Lanka Police was where I contributed best, in investigations into crimes against children and women. I have experience in the International field with the United Nations (UN) Peace Operations, specifically in the UN Peace Keeping Missions in Timor Leste (UNMIT) and South Sudan (UNMISS).

I have completed several diploma courses, especially in the field of human rights, and certificate courses on the prevention of violence against women, forensic deoxyribonucleic acid evidence, and criminal investigation.

During this period, I have also worked as a Deputy Team Leader for the National Vulnerable Persons Unit, and also as a Personnel Officer and Induction Training Officer.

Are you satisfied with your four months’ of work so far?

Yes. I was able to do many things as I mentioned before and am hoping to do more in the future in the context of my Range. But if we have the freedom, proper freedom to do our duty as senior officers and are not considered as women in this field but simply as officers who are willing to work the same as male officers, I would appreciate that. As Police officers, we are here to change the disparity and help the public. We cannot have gender issues as we all work for the general public. We could contribute more if we have the freedom to work.

Professionally, what are the regrets you have?

I hope we would have more support from senior officers in the Sri Lanka Police. Just because we are women that does not mean that we should be sidelined. There is a lot of discrimination in the Police and a disparity. Male officers would not allow us to work since they don’t believe in our working capabilities. We have been marginalised in everything.

We have to build the Sri Lanka Police together so that the public will also have faith in us. We tell the people that we offer a friendly, professional, and prestigious Police service, but inside the Police, as women, we have been victimised. As the DIG of the Police Ombudsman Range at the Sri Lanka Police, I am the one who is making the biggest complaint. Why is my service neglected and dragged into unnecessary issues? Why are we wasting time and public money? How am I supposed to provide a service to the public if I am dragged into unnecessary issues? Why can’t I make the best use of my local and international experience? This discrimination directly targets the senior female officers in the Police.

Lastly, do you have any requests?

Let us work and stop this discrimination.