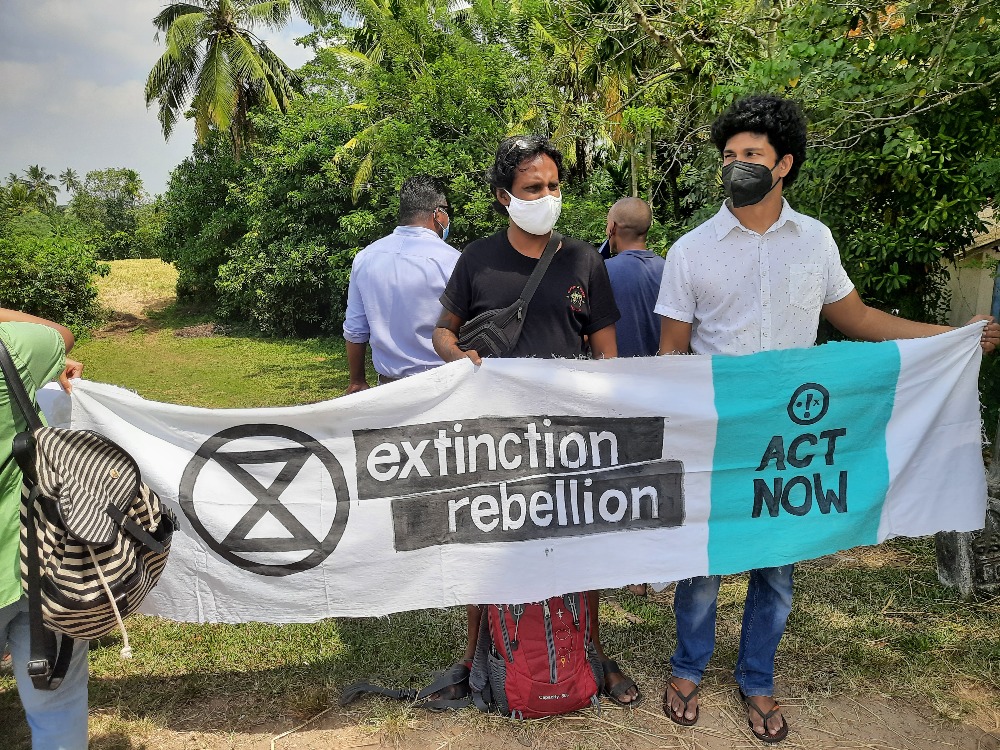 Senseless destruction of a protected wetland?: Raising awareness in support of Thalangama Wetland

February 15, 2021 by Venessa Anthony No Comments

Colombo is the world’s only Ramsar-accredited international wetland capital city. On top of 40% of Colombo’s wetlands already being lost due to direct and indirect impacts of urbanisation, the construction of a 10.4 km-long highway around the Thalangama Lake bunt threatens to further destroy wetlands. This construction would entirely, according to concerned parties, destroy the land’s biodiversity and the indirect impact from toxic emissions would further contribute towards the destruction of surrounding areas.

People from many communities came together to raise awareness against the destruction of the wetland on 13 February at an environmental rally. 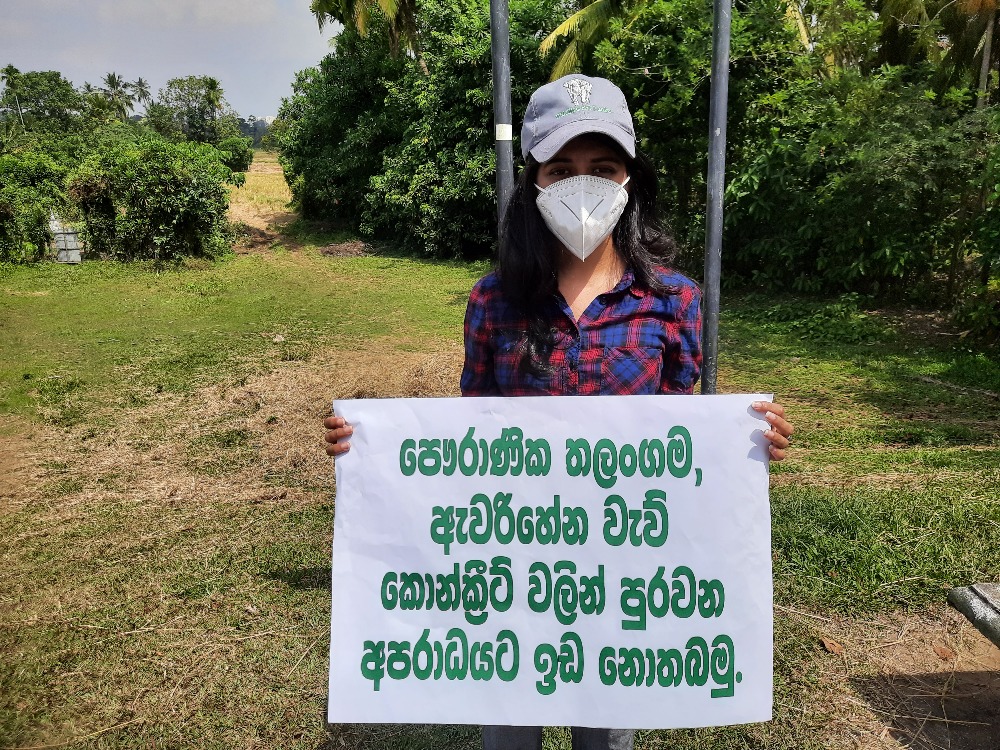 “Just like they did with the Circular 05/2001 and the Sinharaja road, halting does not mean that they will not carry on with it”  Avishka Sendanayaka from Extinction Rebellion in Sri Lanka

The construction of this elevated highway would not only destroy biodiversity, but would also take away the livelihoods of farmers in agriculture-dependent communities, according to activists. Aside from farming, there are many communities that depend on wetlands; they make a living by sourcing lotus and lilies, fishing, and more.

Environmentally, wetlands provide critical life support, keeping people safe from flooding, filtering polluted water, cooling air, and even providing food. Without wetlands, there would be annual floods in the cities as the lake retains floodwater and diverts the excess into the Kelani River.

Avishka Sendanayaka from the global environmental movement Extinction Rebellion in Sri Lanka, speaking to The Morning Brunch, said: “Today, we are here to support the local community at the Thalangama Wetland area, especially because there is a proposed road that is supposed to be cutting through the wetland area and centuries-old paddy fields, through the Thalangama Environmental Protection Area.”

She observed that there was quite a big crowd at the rally, with most of them being locals and farmers who will be most affected. She added that she had received information that the project was on hold for now, but noted: “Just like they did with the Circular 05/2001 and the Sinharaja road, halting does not mean that they will not carry on with it.”

Avishka hopes that the protest will spread awareness and that they can stop this disaster before it begins.

We spoke to the organiser of the rally, Amendrajith Pilapitiya, on what their end goal is. “This is more of an awareness programme. What called us to action was when we heard that a proposed roadway was being planned across the Ramsar-protected area, destroying almost 3.4 km of it.”

Wetlands as we know keep disappearing from Earth in a time when Colombo is the only capital wetland city in all of Southeast Asia, he said, stressing that we cannot afford to lose it. “This area is a gazetted protected area from the Sri Lankan Government, and we want to do whatever we can to raise awareness that it remains a protected area.”

The destruction of this particular area is illegal, as it is supposedly protected by the government. Yet, they seem to be going ahead with the destruction of the wetlands. He informed us that the Government is currently attempting to degazet this, but they are fighting so that it may remain protected.

“There are so many alternatives for them to build roads; it doesn’t have to be at the cost of the environment,” he said. 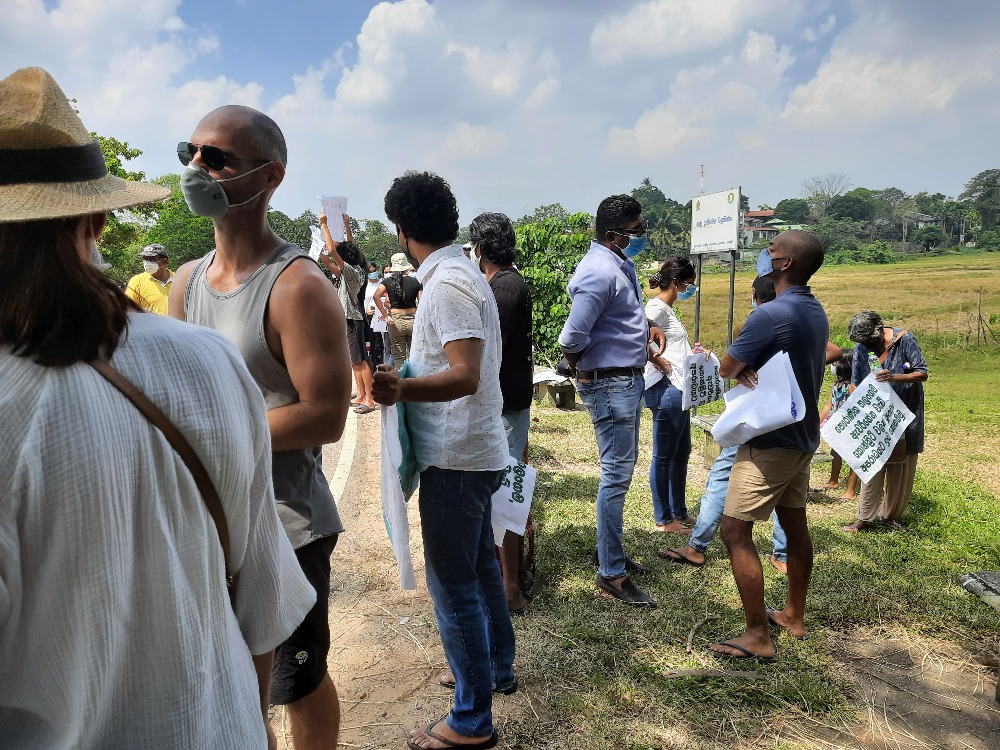 Appeals have been made

In conversation with Jomo Uduman, a paddy farmer at the rally, he shared: “Our agitation began when we realised an elevated highway was coming from Rajagiriya to Athurugiriya, and the direction was changed to bring it over these wetlands.”

He stated that they found the Road Development Authority (RDA) putting roadmarks over their paddyfields without permission and Survey Department members surveying the land without any dialogue with the residents, which understandably caused them to worry. They then took steps to try and understand what exactly was going on by writing to the President with 175 signatures two months ago.

“We did not receive any acknowledgement and we are worried whether he even received our letter,” he said, adding that this is what prompted them to raise awareness, so that government officials could realise what is going on. He also said that they did a lot of newspaper publicity and wrote to the Surveyor General.

“We copied all our letters to the RDA and the CEA (Central Environmental Authority), who informed us that they haven’t given approval for this as there is a gazette of 2007, which stated that the only activities permitted here are fishing, bird-watching, and paddy cultivation.”

He further noted that the only way this construction would be allowed was if they degazet it, but the Attorney General’s Department has informed them that this is impossible.

Currently, residents are imagining huge elevated highways running through their paddy fields and destroying their lives and livelihoods. Jemo shared that there are over 100 species of birds in this wetland and urged people to imagine this highway being constructed.

“What would happen to these people and animals?” he questioned. “We are appealing to the President to acknowledge our pleas. We know he is very environmentally conscious and we urge him to take a stand against this meaningless destruction.”

Your wedding has been ‘pandemicked’

May 31, 2020 byJennifer Anandanayagam No Comments
Lots of weddings the world over were cancelled after lockdowns and curfews were put in place in March, with things growing bleaker as time wore on and the long-term ramifications of the pandemic becam