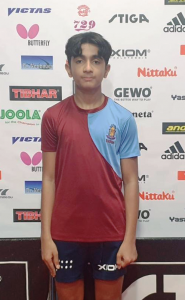 Senul Ratnayake, 12, of Dharmaraja College, Kandy has shown tremendous promise in the game of table tennis

Qualifies to play in ITTF World Hopes Challenge in Jordan

Kandy’s 12-year-old Senul Ratnayake, a student of Dharmaraja College here, who is coached by Hasitha Samaraweera, has made his school, parents, Kandy, as well as the whole country proud by being selected for the International Table Tennis Federation (ITTF) World Hopes Table Tennis Challenge.

This event will be held in Jordan in December. This is the first time in the history where a Sri Lankan schoolboy has been selected for this global Under-12 event.

Only 20 boys have been qualified globally, out of 20 countries, for the event in which there are only four Asians who have been picked this time for this prestigious competition.

This young master of Kandy has represented the Sri Lanka junior table tennis (TT) team as the youngest player of the ITTF World Junior Ranking TT Tournament which took place in Oman in October this year.

Senul pocketed 13 points there and was selected as the world rank of 67 in the Under-13 age group. This was to be his very first World Ranking Tournament.

His main intention now is to be promoted amongst the top ten in the Under-13 age group and bring glory to mother Sri Lanka.

He has already reached the main draw in the U-15 category and displayed tremendous performance at the World Junior Ranking TT Tournament held in Muscat, Oman this year.

He captained the Dharmaraja U-10 TT team that reached the semi-finals at the Inter-school TT Championship in 2019.

He then became champion of boys’ U-10 age group category at the All-Island Unranked Table Tennis Championship in 2018.

Due to his superb skills, he was presented the award of Maroons in two consecutive years at the Dharmaraja College Colours Night, in years 2018 and 2019.

In 2018, he was appointed as a Senior Prefect of the Primary Section of the school. He was also a member of the Dharmaraja College Music Group at the Susara Musical Programme in 2018.

This young and talented table tennis prodigy has promise. He can make his school, Kandy, and Sri Lanka more proud one day in the game of table tennis.

Athapaththu: ‘We want to win the series and build momentum for the Commonwealth games’

June 23, 2022 byNews Admin No Comments
At a pre series press briefing, held via Microsoft Teams, Sri Lanka Women’s Cricket skipper Chamari Athapaththu emphasised on the importance of this Indian series which is scheduled to start Today at