** The five-match T20 tour of Bangladesh in August is yet to be confirmed. Tours are subject to agreement on bio-security arrangements and relevant government approvals. 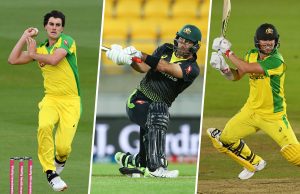 (From left): Pat Cummins, Glenn Maxwell, and David Warner are among the seven leading Australian players who have confirmed their withdrawal from the upcoming white-ball tour of West Indies and Bangladesh in July and August

Australian selectors yesterday (16) confirmed a final 18-man squad for the white-ball tours of the Caribbean and Bangladesh, which will act as crucial preparation for Australia’s T20 side ahead of the World Cup in October and November.

Released from quarantine after IPL

Smith has withdrawn due to an elbow injury while the six others, according to a release from Cricket Australia, “requested not to be considered for the tour for various reasons,” reported cricket.com.au.

All-rounder Daniel Sams, who contracted Covid-19 in India ahead of the Indian Premier League (IPL), made himself unavailable for selection a month ago on health and wellbeing grounds.

Cummins, Maxwell, Warner, Stoinis, and Jhye Richardson were released from hotel quarantine a little more than a fortnight ago following the abandonment of the IPL and Australia’s subsequent border closure for all arrivals from India, which led to the Australian contingent spending more than a week in the Maldives before they could return home.

Kane Richardson left hotel quarantine around three weeks earlier than the rest of the IPL contingent after he, Adam Zampa, and A.J. Tye flew out of India before the federal government’s travel ban had come into effect. Richardson, who has a young son, has declined to tour, while Zampa and Tye will go.

Jason Behrendorff, Moises Henriques, and Riley Meredith have all agreed to tour despite also being part of the IPL contingent that recently left hotel quarantine having returned home via the Maldives. 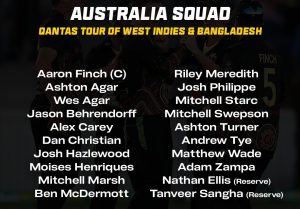 “We are naturally disappointed not to have all players available for the Australian team at this time however the NSP (National Selection Panel) respects the decisions of those who have opted out of this tour,” Head Selector Trevor Hohns said in a statement.

“Steve Smith was unavailable for selection due to an elbow injury and will now be able to use this time to fully recover ahead of the World Cup and home Ashes series. Steve was disappointed to miss the tour with the decision made on medical grounds.”

Also in the final squad are all-rounder Dan Christian and batsman Ben McDermott, who are both currently in hotel quarantine in Australia having recently arrived from county stints in the UK. Christian had headed to England from India after the IPL was suspended.

From the preliminary 29-man squad that was finalised last week, nine players have been omitted; the seven from the IPL including Smith, D’Arcy Short (who is currently in England playing T20 cricket for Hampshire) and Western Australia (WA) all-rounder Cameron Green.

Uncapped duo Tanveer Sangha and Nathan Ellis will both travel with the squad having been named as touring reserves.

Leaving to Caribbean on 28 June

The Australians will fly to the West Indies on 28 June, meaning the IPL contingent will have less than a month at home before heading abroad again.

Will they play in IPL remainder?

It remains to be seen if Australian players will take part in the IPL when the tournament resumes in September ahead of the World Cup.

The willingness of Australia’s best players to take part in two IPL tournaments involving four periods of quarantine inside 12 months –the latter during the period of player leave– is likely to reignite the “club vs. country” debate, but spinner Ashton Agar said players risk being burnt out in the current climate.

Once he is released from jail: Becker could be kicked out of UK

May 5, 2022 byNews Admin No Comments
Boris Becker could be kicked out of the UK after serving his prison sentence. The German, jailed for bankruptcy fraud, has lived in Britain since 2012 but will be considered for deportation as he does