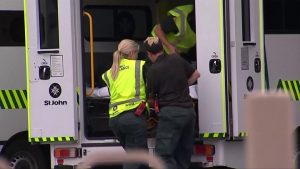 There are “multiple fatalities” after shootings at two mosques in the city of Christchurch, police in New Zealand have confirmed

Police commissioner Mike Bush confirmed that one person is in custody, but said it was unclear if others were involved.

Witnesses told local media they ran for their lives and saw people bleeding on the ground outside the Al Noor mosque.

Authorities advised people not to go to mosques until further notice. All Christchurch schools are on lockdown.

In a statement to the nation, Prime Minister Jacinda Ardern said details were not yet clear, “but I can tell you now – this will be one of New Zealand’s darkest days”.

Mohan Ibrahim, who was in the area of the Al Noor mosque, told the Herald: “At first we thought it was an electric shock but then all these people started running.

“I still have friends inside.

“I have been calling my friends but there are many I haven’t heard from. I am scared for friend’s lives.”

It is not yet known how many shooters there were, but the New Zealand Herald reports that one gunman is believed to be an Australian who has written a manifesto outlining his intentions. In it, he espouses far-right ideology and anti-immigrant ideology.

Unverified footage purportedly taken by the shooter has emerged, suggesting he filmed as he shot victims.

What happened at the Al Noor mosque?

The sequence of events remains unclear and mostly come via eyewitness reports to local media.

Witnesses at the Al Noor mosque, located in central Christchurch along Dean Avenue, facing Hagley Park, reported seeing people bleeding on the ground outside the building, but such details have not been confirmed by police or officials.

There are reports that a second mosque in the suburb of Linwood has also been evacuated and the police commissioner said “multiple fatalities” were recorded at two locations. (BBC)

July 5, 2019 byRandev No Comments
China is deliberately separating Muslim children from their families, faith and language in its far western region of Xinjiang, according to new research.

May 31, 2019 byRandev No Comments
US President Donald Trump has announced tariffs on all goods coming from Mexico in a bid to curb illegal immigration.