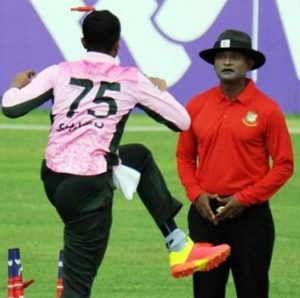 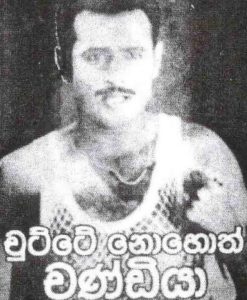 Remember the 1965 K. Gunaratnam blockbuster “Chandiya” and its wild, thuggish Chutte, played by Gamini Fonseka? Bangladesh’s living cricketing legend Shakib Al Hasan acted Chandiya in a Dhaka Premier League (DPL) match on Friday (11). He first kicked the stumps and later uprooted the whole set of them and flung them on ground just in front of the head umpire. Shakib, captaining Mohammedan Sporting Club in a game against Abahani Limited, had been furious at the umpire’s decision to turn down his lbw appeal against Mushfiqur Rahim. He had then been angered by the umpires calling for the covers with one ball remaining in the sixth over as the rain came down. You need to uphold good conduct of the sport, no matter how big your name is. The kids are watching Shakib! You were once a UNICEF ambassador too!

Shakib Al Hasan has been let off lightly with a four-match suspension from Dhaka T20 Premier League, following his on-field meltdown during a match between Mohammedan Sporting and Abahani Limited

Star Bangladesh cricketer Shakib Al Hasan has been let off lightly with a four-match suspension from Dhaka T20 Premier League, following his on-field meltdown during a match between Mohammedan Sporting and Abahani Limited.

According to leading Bangladesh cricket portal ‘BDCrictime’, “Mohammedan Sporting Club Captain Shakib Al Hasan has been banned for four matches due to his arrogant behaviour in the Dhaka Premier League (DPL). He will not be able to play the eighth, ninth, tenth, and eleventh round matches of the DPL.”

While his team Mohammedan won the match easily by DLS Method, Shakib lost his cool twice during the game — once when he kicked the stumps after a strong leg-before appeal against his Bangladesh team-mate Mushfiqur Rahim and secondly when umpires called for covers with one ball left to complete a minimum of six overs of the Abahani innings which would be required for a result. This time, he rushed from mid-off and uprooted the stumps.

The match did start and Shakib’s team won easily but he misbehaved with rival team officials and former Bangladesh Captain Khaled Mahmud Sujon.

Later Shakib tendered an unconditional apology on his official Facebook page, but his act of trying to damage match property is as good as Level-III offence.

The portal also reported that the decision was taken by Cricket Committee of Dhaka Metropolis (CCDM), chaired by Kazi Imam.

Shakib’s boorish behaviour went viral as video footage of him uprooting the stumps has since then been shared more than million times from various social media handles.

Shakib is Bangladesh’s most prolific international cricketer with more than 10,000 international runs across formats along with nearly 600 wickets.

He has already been banned for one year after failing to report a corrupt approach during an earlier edition of Indian Premier League (IPL).

The unbelievable story of Nadia Comăneci

May 15, 2021 byRevatha No Comments
An example for the gritty youngsters!

January 13, 2021 bySarah Hannan No Comments
Playing Test cricket in Galle without fans is like a wedding without the bridegroom! But that will be the case when England meet Sri Lanka tomorrow (14) at the most iconic and picturesque venue...