Shedding light on the plight of underprivileged children

November 18, 2021 by Venessa Anthony No Comments

In light of the current issues children are facing with a lack of education, Atlas recently hosted a webinar “SipSavi Virtual Panel Discussion” that focused on the plight of underprivileged children in Sri Lanka whose education has been hindered by the loss of parents and economic difficulties.

A point of discussion during the webinar was that even though the number of children attending schools in Sri Lanka has been estimated to be 4.1 million, whether that 4.1 million children have adequate food and a suitable place to live, and whether they have access to all other basic facilities, which remains a question. 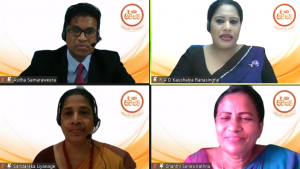 The main objective of the Atlas SipSavi Virtual Panel Discussion was to drive conversation around the issue of underoprpvidelged children whose access to education was affected in recent times.

In response to these needs, the Atlas SipSavi Scholarship Programme was created in partnership with the Department of Probation and Childcare Services. At the initial stage 200 schoolchildren are supported by providing them with financial assistance to continue their education until they reach their key educational milestone GCE Ordinary Level examination. Atlas has committed Rs. 24 million for these scholarships till 2024.

When giving the audience an insight into the programme, Atlas Axillia Managing Director Asitha Samaraweera commented that the Atlas SipSavi Programme aims to support underprivileged children to continue their education. The SipSavi initiative also seeks to increase awareness of the problem and get the attention of the public, understanding that widespread awareness will lead to more action to support the education of underprivileged children at a national level. 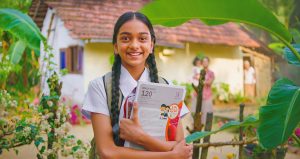 Samaraweera also stated that every time someone buys an Atlas book, there is a portion that goes into the Atlas SipSavi Scholarship fund. When talking about the vision behind the programme, he explained that it is to expand Atlas Sipsavi through multiple partnerships and channels. From 2022 onwards, the SipSavi scholarship will expand to include a further 50 schoolchildren, bringing the total to 250.

The Atlas SipSavi Scholarship does not merely provide funding. Instead, Samaraweera noted that Atlas is taking an active role in the education of these children and tracks their progress and guides them along the way.

It was highlighted by State Ministry of Women and Child Development, Pre School and Primary Education, School Infrastructure, and School Services Department of Probation and Childcare Services Assistant Commissioner Sandareka Liyanage that the the last Activity Survey of the Department of Statistics showed that annually, there were around 20,000 school drop-outs between the ages of five to 17 years as a result of financial difficulties.

Although there has not been a census conducted since, according to the World Bank, the numbers are projected to have risen as a direct impact of the pandemic. Some children from economically challenged households feel they can make a better contribution for home by working, while others are directed to do so by their parents. “School drop-outs are at risk of being subject to child labour, picking up bad habits, or even gravitating towards means of earning an income which is not even suitable for adults, leave alone kids,” she explained.

The moderator of the webinar, Kaushalya Ranasinghe, further highlighted that some children quit education in lower grades such as Grades Six and Seven due to a number of different reasons; the main reasons being economic challenges and difficulties arising within families. In a context where children dropping out of school continues as a challenge, she said that there is a pressing need for a discourse on whether stakeholders can assist those children to continue their education without being affected by the said difficulties.

Liyanage further explained that even though everyone in a family unit, both adults and children, face issues, adults are more capable of overcoming those issues than children, and that how those issues affect children is different. She noted that as a result, children’s education may come to an abrupt halt temporarily or permanently. “Sometimes, schoolchildren may have to look after their younger siblings, or they may have to leave school education to do a job. What is alarming is, it is not always children that make these decisions; sometimes, it is the adults that direct children to engage in such activities,” she stated, noting that they have also observed that parents also create a notion in the children’s mind that the parents are not in a position to facilitate the education of children and that children have to support their families. As a result, sometimes, the home environment makes children think that supporting their families is a greater task than studying.

Southern Province Education Department Additional Director and Principal of Southlands College, Galle Shanthi Seneviratne noted that one of the biggest issues is when mothers go abroad for work and fathers do not care for the children. “When the children are left with relatives, they are keener on getting their own work done through them than sending the children to school,” she explained, adding that there is also a lot of ignorance in parents. According to her, parents send kids to school, but don’t know how to guide them to move forward so children spend more time at home than at school and it is necessary for parents to know how to direct them to study further.

Seneviratne also explained: “We have learnt from children that when children are left with relatives (in the event, parents go abroad seeking employment), these relatives try to use the children to get their personal work done instead of sending them to school.” When it comes to economic challenges, we have seen that by the time children enter higher grades such as Grade 11, they start understanding the challenges their families are facing, including economic issues.

As a result, she added that they start doing small jobs after school hours. Therefore, it is difficult for teachers to keep them after normal school hours when a need arises to give them extra education.

Seneviratne explained that in addition to economic reasons, the lack of understanding among parents about the importance of education, which leads parents to not pay adequate attention to children’s education, is also a notable factor in the Sri Lankan context.

Covid-19 has also caused more dropouts. For example, in fisher communities in the South, 15-16 year olds have started to join their parents in fishing activities while schools are closed. Seneviratne noted that now that they’ve started getting some earnings to their hand, it is very tough to convince them to return to school.

Apart from the SipSavi Scholarships, Atlas supports underprivileged children to continue their education through multiple initiatives such as the Annual Ridi Viharaya Outreach programme which has been ongoing for over 17 years to empower students of rural communities, by providing school supplies and books. To illustrate the widespread impact of these efforts, last year alone, Atlas was able to help 14,400 schoolchildren.

Upeka Chitrasena on turning 70, dance, and the Chitrasena Dance Company

June 27, 2021 byNews Admin No Comments
The Chitrasena Dance Company is one of Sri Lanka’s oldest and most prestigious dance companies. Established by Guru Chitrasena in 1943, the dance company has been instrumental in bringing traditional

March 24, 2019 bythemorninglk No Comments
Jason Caderamanpullé or PULLÉ, who isn’t afraid of getting his fingers “Burnt” in collaboration with Kaushalya Fonseka or KK, has his first-ever single out.