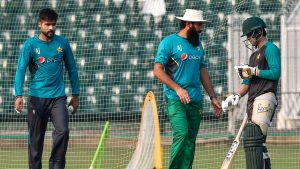 Pakistan captain Sarfaraz Ahmed has come out in support of returning batsmen Ahmed Shehzad and Umar Akmal after their loss to Sri Lanka in the first T20I.

Shehzad and Umar have had a rocky past with the national team, for various reasons, and the revival of their careers in Lahore at the expense of Fakhar Zaman and Haris Sohail drew surprise in some corners.

Umar last played a T20I three years ago, while Shehzad featured in T20Is last year before he was banned for a positive dope test. Both of them made their debuts ten years ago, and though they have made several comebacks, it seemed Pakistan had closed the door on them after they were dropped by not just one head coach but two – Waqar Younis and Mickey Arthur.

On Saturday, in the T20I against Sri Lanka, Shehzad had a couple of close calls before he was bowled for four off nine balls. Umar bagged a golden duck, his ninth – the most by a Pakistan cricketer.