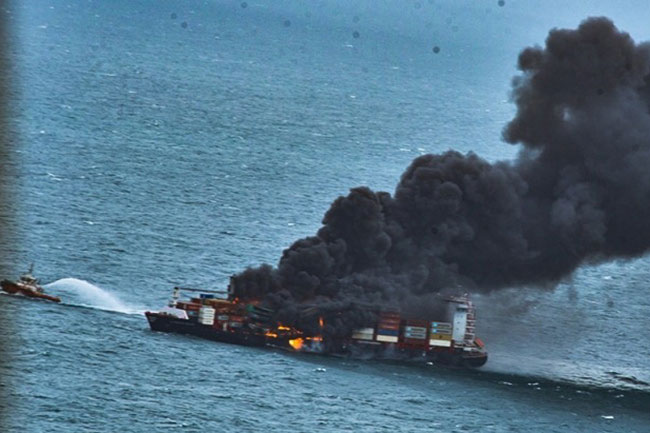 Should the fishing go on?: Damage caused to the fishing industry points to MV X-Press Pearl disaster

Following the MV X-Press Pearl incident, a massive amount of plastic and chemical products, among others, were released into Sri Lankan waters. Environmentalists and public institutions probing the environmental damage the incident has caused have released photos and videos showing fish and turtles that are believed to have died due to the substances the vessel released. Recently, there have been pictures and videos floating around social media of fishing nets that have come up with cotton-like substances, and the nets themselves seeming to have melted.

Following these incidents, the Government set up a committee to evaluate the damage caused due to the disaster and the course of action that needs to be taken to rebuild the marine environment and resources, and the fishing industry. The committee comprises officials and experts from the Fisheries and Aquatic Resources Department, the National Aquatic Resources Research and Development Agency (NARA), the National Aquaculture Development Authority (NAQDA), marine biologist Dr. Asha de Vos, and other experts in the field.

Brunch spoke to the relevant authorities for their thoughts on this matter.

Speaking to former Customs Deputy Director and Lanka Nature Conservationists President Samantha Gunesekara, he noted that this situation has been happening for over a month now, and yet no one seems to know about it, nor is there any official information available. He opined that there is no doubt that this issue is because of the MV X-Press Pearl disaster, yet he cannot officially comment, as no authorities have given adequate information.

“The amount that was given as compensation is also a very small amount, considering the damage that the ship has caused, so why are authorities trying to bury an issue and play it off as something small?” he questioned.

Talking about the damage caused to the nets, he stated that if there is this amount of damage caused to nets, to the point where they disintegrate, we cannot begin to fathom how much damage could have been caused to marine life and coral reefs. Sri Lanka is famed for its beautiful beaches and rich marine life, so this will undoubtedly cause a dip in tourism as well, which points to the fact that this is a problem of a very large scale, bringing us back to Gunasekara’s question on why information is not given to the public.

He also informed us that until the UN team came here, the Government was mitigating the issue, making it seem almost nothing of concern. “We don’t even have the results from the lab analysis, so we cannot directly point the issue to the ship, but we have had no problems until this disaster happened; so all factors point to this as being the cause of the environmental destruction.”

The effect on the fisheries community

Speaking of how the fisheries communities have been affected due to the MV X-Press Pearl disaster, a leading fishermen’s organisation, the National Fisheries Solidarity Movement (NAFSO), said that thousands of registered and unregistered fishermen of various sectors related to the fishing industry have been rendered helpless.

NAFSO Convenor Herman Kumara, speaking to The Morning previously, had said that even though the prohibition on fishing in the Negombo Lagoon area, which had been imposed following the fire aboard the MV X-Press Pearl, was lifted recently following discussions with the authorities, fishermen remain unable to continue their activities as before. He added that the nature of the fishermen’s occupation has changed owing to the ocean’s condition. Yet, from the pictures and reports posted online, the issue seems to prevail, showing that nets seem to be disintegrating and marine life is affected.

He further commented: “The prevailing situation has put fishermen at risk of losing their jobs, and there are a lot of fishermen who make a living out of fisheries activities in this area. There are more than 10,000 fishermen registered with the Negombo District fisheries office, and there are also a lot of unregistered people engaged in this industry. When it comes to the jobs of fishermen, we usually discuss the issues faced by those who are registered with the authorities; however, those without registration, including small and large scale sellers, those providing ice, carriers, those providing food, and also women engaged in post-harvest industries such as the dried fish industry, are also facing issues.”

On the topic of allowing fishermen to continue fishing, he further noted that even if they were to do so, they cannot get a proper catch, and that it is also difficult to sell their harvest. He said that in a context where the people have reduced their consumption of fish, a considerable number of buyers have stopped buying fish from these areas, in turn affecting the fishermen’s lives and economy.

“Since most fishermen have obtained loans, while some run their businesses on borrowed money, especially for the purpose of purchasing fuel, they are facing more issues due to being unable to pay the loan instalments. Borrowing money is also an issue, since small-scale village-level lenders also do not have adequate money to give loans to fishermen, as they are also affected by the prevailing situation,” he explained, stressing that this situation has affected not only individual fishermen, but entire fishing villages.

Commenting on the issues with the cotton-like substances caught into the nets that have also melted, Conservationist Jayantha Wijesinghe stated that there is no doubt that there is still hazardous waste floating around in the oceans, causing damage to everything around it. “Most of the cargo is burnt, but no one knows accurately how many chemical containers remain intact. Nobody knows how many of the containers that fell into the sea while the ship was burning are now stacked on the ocean bed.”

He too questioned the lack of information given by the Government regarding this issue, stating that we should at least be informed officially if fish is safe to eat, as looking at the damage caused to the nets, it points to the fact that we may be ingesting poisonous materials.

He observed that with such a large amount of nitric acid, caustic soda, sodium methoxide, and other chemicals in the relatively shallow water around the now sunken ship, with several natural reefs in the vicinity, the dramatic change in the PH level of the water, if even for an instant in time, will have affected highly-sensitive marine flora and fauna.

“Reports abound of visible marine life death (turtles, fish, crabs, and many other reef-based marine fauna and flora). Although small, burned carcasses have washed up to shore, the impact on large mammals such as whales and dolphins is yet to be seen. Some may have managed to abandon the area for the time being. Also mostly unseen is the damage under the ocean; damage from plastic raw materials and chemicals, burnt containers and parts, and oil from barrels and fuel tanks could last decades if not centuries.”

There seems to be no feasible solution to this problem, at least until more information is revealed to the public and the issue is given the spotlight it requires.

The arts may be the last thing on your mind

May 6, 2020 byJennifer Anandanayagam No Comments
Should this really be the case? Must we constantly dwell on this unfortunate fact of life we are all actively aware of? Many would argue that it is counterproductive to dwell on the one thing that is

‘Fashion with a Purpose’: An initiative by the Indira Cancer Trust

April 26, 2021 byNews Admin No Comments
The Indira Cancer Trust, set up in memory of Indira Jayasuriya, who passed away in November 2016 from breast cancer at the age of 40 years, launched their latest programme “Fashion with a Purpose”, at