Simone Biles admits she “should have quit way before Tokyo” 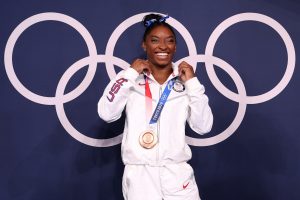 American four-time Olympic and 19-time world gymnastics champion Simone Biles has said she should not have competed at Tokyo 2020.

Biles is regarded by many as the greatest gymnast of all time, and won gold medals in the all-around, floor exercise, vault and team events at Rio 2016.

At Tokyo 2020, she withdrew from several events in order to prioritise her mental health, although she did clinch a bronze in the balance beam final.

She later explained that she has the “twisties”, where a gymnast loses the ability to gauge where they are in the air when performing

Biles revealed in 2018 that she was a victim of sexual abuse by disgraced former USA Gymnastics doctor Larry Nassar, who is serving up to 175 years in prison for his crimes committed under the guise of medical treatment.

World have pulled out

This month, she testified at a United States Senate Judiciary Committee hearing into the Federal Bureau of Investigation (FBI) mishandling of the investigation of Nasser.

Biles had told ‘TODAY’ earlier in the year that the abuse may have contributed to the issues she faced in the Japanese capital.

“Now that I think about it, maybe in the back of my head, probably, yes, because there are certain triggers,” she said.

“You don’t even know, and I think it could have.”

In an interview with the New York Magazine, Biles has now said she should have pulled out of this summer’s Olympic Games.

It was too much

“If you looked at everything I’ve gone through for the past seven years, I should have never made another Olympic team,” she said.

“I should have quit way before Tokyo, when Larry Nassar was in the media for two years.

“It was too much.

“But I was not going to let him take something I’ve worked for since I was six years old.

“I wasn’t going to let him take that joy away from me.

“So I pushed past that for as long as my mind and my body would let me.”

Biles explained that she had no choice but to withdraw, describing the dangers associated with competing with the “twisties” in the vault event.

“It’s so dangerous,” she said.

“It’s a miracle I landed on my feet.

“If that was any other person, they would have gone out on a stretcher.

“As soon as I landed that vault, I went and told my coach: ‘I cannot continue.’”

However, she also made clear that she had no regrets at how Tokyo 2020 panned out.

“Everybody asks, ‘If you could go back, would you?’” Biles commented.

Everything happens for a reason

“I wouldn’t change anything because everything happens for a reason.

“And I learned a lot about myself – courage, resilience, how to say no and speak up for yourself.”

The interview also covered the added pressure felt by Biles as a black athlete.

“As a black woman, we just have to be greater,” she said.

“Because even when we break records and stuff, they almost dim it down, as if it’s just normal.”

December 17, 2018 byRevatha No Comments
Sri Lanka are still behind 276 runs with 7 wickets in hand and are in with a possibility of an innings-defeat in the first Test

SL was the largest contingent to return home without a medal

September 3, 2018 byRevatha No Comments
Sri Lanka sent 172 athletes. Nobody sent more and returned home without a medal this time in Indonesia.