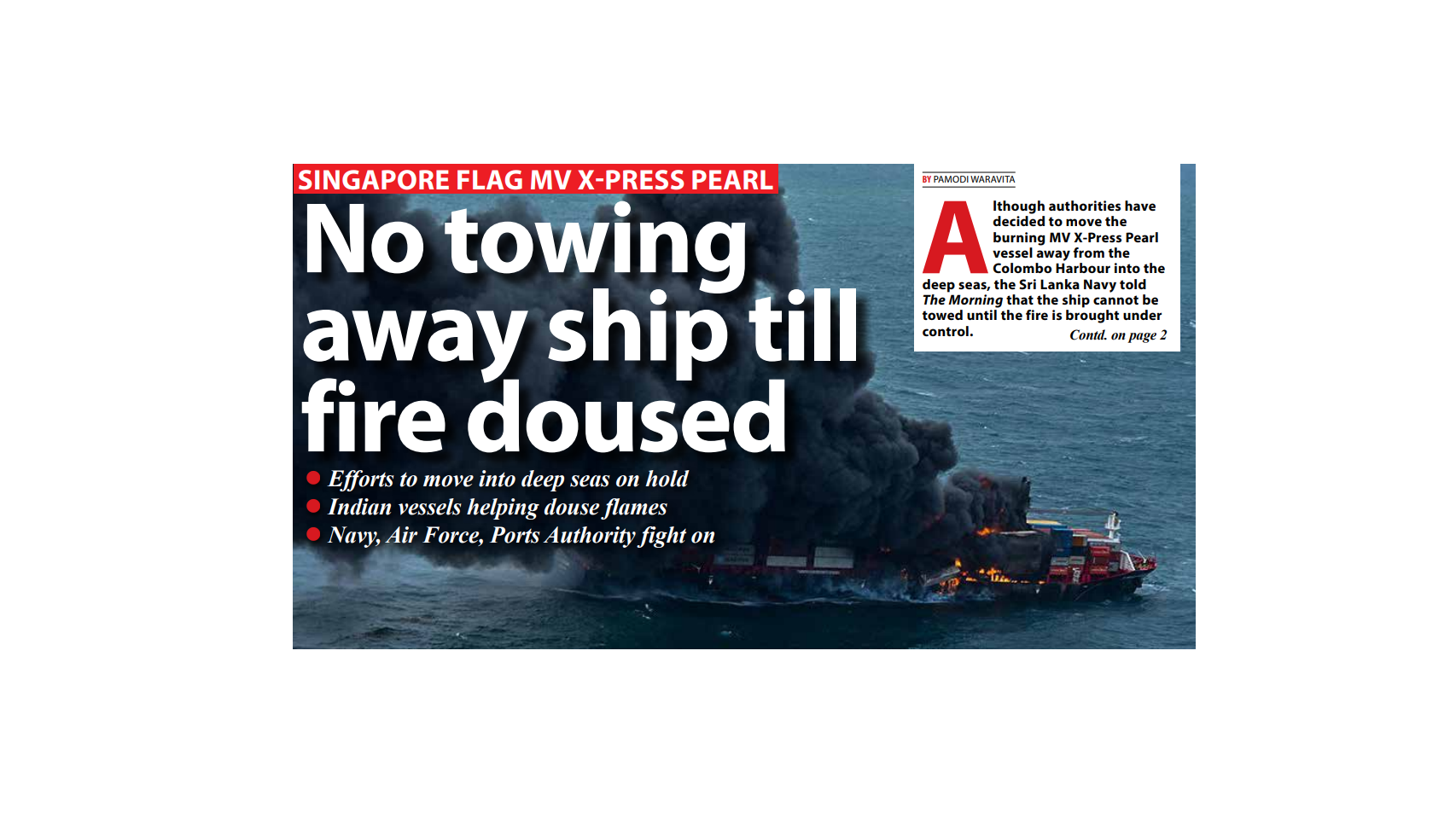 Although authorities have decided to move the burning MV X-Press Pearl vessel away from the Colombo Harbour into the deep seas, the Sri Lanka Navy told The Morning that the ship cannot be towed until the fire is brought under control.

The authorities, which includes the Marine Environment Protection Authority (MEPA), had earlier planned to tow away the ship 50 nautical miles into the deep seas in order to minimise the environmental harm caused by the fire onboard it.

Navy Media Spokesman Capt. Indika De Silva told The Morning that as of yesterday (25) afternoon, the ship could not be towed into the deep seas as the fire had not been brought under control.

The Navy, along with the Sri Lanka Air Force (SLAF) and the Sri Lanka Ports Authority (SLPA), is making combined efforts to control the fire aboard the vessel, which was worsened due to an explosion that occurred yesterday morning.

“We have also requested assistance from the Indian Coast Guard, which is due to arrive on 25 (yesterday) evening. They would also assist us in assessing and minimising the environmental damage to the ocean,” added Capt. De Silva.

In a statement issued to the press, the Indian High Commission of Sri Lanka confirmed yesterday evening that Vessels Vaibhav, Vajra, and Samudra Prehari of the Indian Coast Guard and Tug Water Lily of the Director General of Shipping and the Dornier aircraft for aerial reconnaissance have been dispatched to assist in the fight to douse the flames.

Capt. De Silva further said that following the fire which initially broke out onboard the ship on 20 May, a salvage company had evacuated 12 of the 25 crew members onboard the ship. “As of yesterday, 25 remained, consisting of 12 salvage company members and 13 crew members. Following the rescue operations, everybody has been evacuated. Two sustained injuries and have been sent to the National Hospital in Colombo for treatment,” he explained.

Meanwhile, SLPA Chairman Gen. (Retd.) Daya Ratnayake told The Morning that although the SLPA has met with the local shipping agent to evaluate and assess the compensation that would be required, a decision has not been reached yet.

Speaking to The Morning, MEPA sources noted that a chemical fire could also arise in the ship since nitric acid and the other chemicals including caustic soda that are present aboard are highly reactive and inflammable and could release toxic fumes into the environment. Again, the MEPA says the impact would most likely be localised.

“However, the impact would be localised as the ship is already 9.5 nautical miles away from the mainland. There would be no harm to the people on land as we have already calculated that by the time the fumes reach the mainland, the harm would be far less than the threshold limit,” said MEPA officials.

Reportedly, the Air Force Media Spokesperson has said that a Bell-212 aircraft was deployed to drop dry chemical powder on the vessel.

MEPA officials further said that the 10 containers inside the vessel have been dropped into the sea. As such, officials are advising the public to not touch any items that may wash ashore. Reportedly, the SLPA has deployed three tugboats to reduce the heat in the area surrounding the containers.

State Minister of Ornamental Fish, Inland Fish and Prawn Farming, Fishery Harbour Development, Multi-Day Fishing Activities, and Fish Exports Kanchana Wijesekera tweeted yesterday that fishermen have been warned to not go near the containers and to inform the authorities if they do sight any.

Officials have not yet been informed of what is in the containers. The vessel, registered under the flag of Singapore, reportedly carried over 1,000 containers with 25 tonnes, each, of nitric acid and cosmetics. It departed from the Indian Port of Hazira on 15 May.

A total of 300 tonnes of bunk oil, used for fuelling the ship, is also on the vessel, said MEPA officials. Although a threat would arise if there are oil spills, MEPA has already initiated the first steps of the “National Oil Contingency Plan” in preparation of any potential harm.

June 18, 2019 byRandev No Comments
Sri Lanka and Japan are scheduled to sign a deal on skilled workers, which is set to take place in Japan tomorrow (19).

‘E-thaksalawa’ implemented as the official online learning portal in schools

January 5, 2021 byMihi Perera No Comments
The Cabinet of Ministers yesterday approved a proposal to implement ‘e-thaksalawa’ online programme as the official online learning portal in the schools and other educational institutions functioning