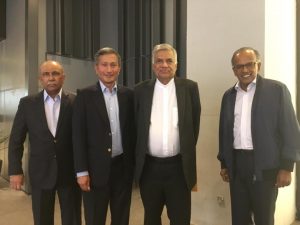 Singapore’s Law and Order Minister K Shanmugam has said that Singapore would assist Sri Lanka in its efforts to establish peace in the Asian region.

The minister had made these remarks during a meeting with Prime Minister Ranil Wickremesinghe who is on an official visit to Singapore.

During the discussion, the Prime Minister had discussed on how counter-terrorism measures could be collectively implemented by both countries.

October 13, 2021 byRuwani Fonseka No Comments
The Trial-at-Bar appointed to carry out proceedings into the February 2015 bond scam will continue without the presence of Former Central Bank Governor Arjuna Mahendran and others accused.

Will not accept everything said by others in int’l forums: FM

March 25, 2021 byMihi Perera No Comments
Minister Dinesh Gunawardena said today that the government is not ready to accept everything that is said by external parties in international forums.