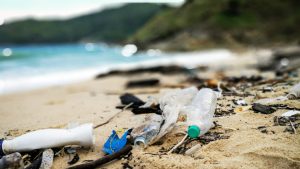 The Central Environmental Authority (CEA) submitted a proposal to the Cabinet of Ministers to consider banning single-use plastic items starting from 2021.

The CEA cited the extensive damage caused to the environment due to the use of such products.

“As a first step, the use of small plastic bottles containing soft drinks would be regulated under the proposal, and we are also looking at possible alternatives for plastic cutlery used for yoghurt, ice cream, and in the food takeaway sector. Plastic clips used in the packaging of shirts too will be taken into consideration and alternatives would be considered,” CEA Director General Hemantha Jayasinghe noted.

The Government of Sri Lanka was urged by environmentalists on several occasions to ban single-use plastics, and in March 2019, during the time of the Yahapalana Government, organisations such as the Centre for Environmental Justice (CEJ), The Pearl Protectors, and Friends of the Earth Sri Lanka wrote to the President, Prime Minister, Speaker of Parliament, Minister of Finance, and all parliamentary members requesting to implement a ban.

The first attempt to regulate plastics in Sri Lanka came in 1994, during the period Srimani Athulathmudali was the Minister of Environment, when several guidelines and the proposal to ban high-density polyethylene (HDPE) bags with less than 20 microns in thickness were put forward.

However, this was not implemented at all.

In January 2007, a ban was imposed by former President Maithripala Sirisena who was the Environment Minister at that time. Under section 23W of the National Environmental Act No. 47 of 1980, Gazette Notification No. 1466/5 was issued banning the use of polythene that was less than 20 microns in thickness.

However, this was not effectively enforced since it was not easy to measure thickness during raids.

A conservation levy was introduced for HDPE bags in 2008, under the Environment Conservation Levy Act No. 26 of 2008. However, it was abandoned after a Supreme Court (SC) order was issued against charging Rs. 2 for a plastic bag.

The other reason was that the conservation levy proceeds were sent to the “Environment Conservation Levy Account” of the Consolidated Fund, which was never spent on the national recycling efforts of the CEA. The levy was also imposed on incandescent bulbs and mobile phone bills.

A set of regulations were introduced in 2017 to stop the use of HDPE bags, lunch sheets, and polystyrene boxes. The Gazette Notification No. 2034/33 – 1 September 2017, issued under the National Environmental Act, for the prohibition of the manufacture and sale of polythene and related products, issued by former President Sirisena, prohibits the manufacture of polythene or any polythene product of 20 microns or below in thickness for in-country use or sale, offer for sale, offer free of charge, exhibition, or use of polythene or any polythene product which is 20 microns or below in thickness within the country.

Also, the Gazette Notification No. 2034/34 – 1 September 2017 prohibits the manufacture of food wrappers from polythene as a raw material for in-country use, and the sale, offer for sale, offer free of charge, exhibition, or use of food wrappers manufactured from polythene as a raw material within the country. For the purposes of this order, “food wrappers” means lunch sheets; “polythene” includes HDPE, low-density polyethylene, and polypropylene.

Gazette Notification No. 2034/36 – 1 September 2017 prohibits open burning of refuse and other combustible matters inclusive of plastics.

However, none of these attempts have made a significant impact on plastic pollution in Sri Lanka. This is mainly due to the lack of a correct enforcement mechanism by governmental agencies including the CEA.