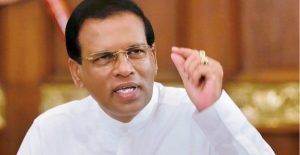 Piyadasa, a senior member of the SLFP  was appointed as Act. Chair of the party until the end of the presidential elections.

Sirisena announced that he would take a neutral approach in the days leading up to the polls, as he was the commander in chief of the armed forces and police.

SLFP pledged its support to President Gotabaya Rajapaksa at the recently concluded polls and will contest the up coming General elections, Pradeshiya Saba elections and provincial council elections under the SLPP-SLFP Alliance.

October 25, 2021 byRuwani Fonseka No Comments
A complaint has been filed at the Criminal Investigations Department (CID) against Reverend Fr. Cyril Gamini Fernando by the Director-General of the State Intelligence Service Major General Suresh Sal

March 24, 2021 byNews Admin No Comments
The vote on the Resolution on Sri Lanka by the United Nations (UN) Core Group of Countries on Sri Lanka was adopted yesterday (23) by the UN Human Rights Council (HRC) with a majority margin of 11 vot