Six judges of the Appeal Court have been elevated to fill up vacancies at the Supreme Court.
During its meeting held on Tuesday (6), the Parliamentary Council approved the names of the six judges.
By way of the 20th Amendment to the Constitution, President Gotabaya Rajapaksa is vested with the powers to make appointments to the Court of Appeal and the Supreme Court. 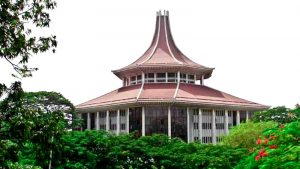 May 16, 2021 byAazam Ameen No Comments
In a joint statement released by Amnesty International, thirteen organisations have expressed deep concern about the ongoing detention of poet and teacher, Ahnaf Jazeem, who has now been detained for