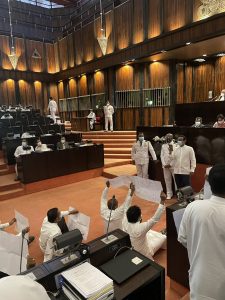 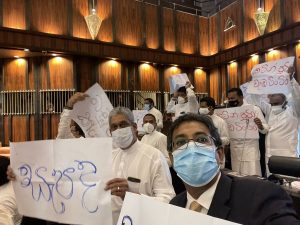 The proceedings of Parliament commenced this morning (23) and a group of members of the Samagi Jana Balawegaya (SJB) had started a protest in the chamber of Parliament.

Members of the party had reportedly come to the center of the chamber to protest against the government’s decision to increase fuel prices.

They were also seen sitting on the floor in the middle of the chamber as they continued to protest against the increase in fuel prices.

January 9, 2021 byLahiru Pothmulla No Comments
Three Sri Lankan men have been charged in California with aiding the terrorist group blamed for 2019 Easter attacks that killed 268 people in Sri Lanka, including five US citizens, and injured hundred

China is winning in Asia; Biden’s plans won’t change that

June 2, 2022 byNews Admin No Comments
US President Joe Biden has said the US won’t stand by and let China “win the 21st Century,” and his first trip to Asia was meant to match words with action.