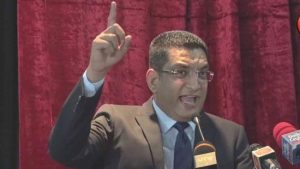 A heated argument between Samagi Jana Balawegaya (SJB) MP Chaminda Wijayasiri and Minister of Justice Ali Sabry took place in Parliament today (25), due to a reference to the Justice Minister’s attire.

Wijayasiri was posing questions regarding the allegations against Dr Mohamed Safi Shabdeen of the Kurunegala Teaching Hospital of performing sterilization surgeries on Sinhalese women, and whether the necessary measures were being taken by the current government against the suspect.

He referred to the Justice Minister’s attire in a passing comment while posing the question. “We hope that these government ministers wearing ties and coats would do justice to this case,” he said.

Ali Sabry accused Wijayasiri of inciting racism by bringing up unnecessary issues. He stated his attire was appropriate for Parliament and he was not bound to follow a dress code endorsed by Wijayasiri.

June 24, 2021 byNews Admin No Comments
The Environment Ministry is to revise the method of issuing permits for sand mining and obtaining soil through excavation and the relevant circular is currently being prepared, The Morning learnt.

July 15, 2020 byTSM Web Desk No Comments
The Government has dismissed rumours claiming that it will impose curfew and declare public holidays in the coming days.