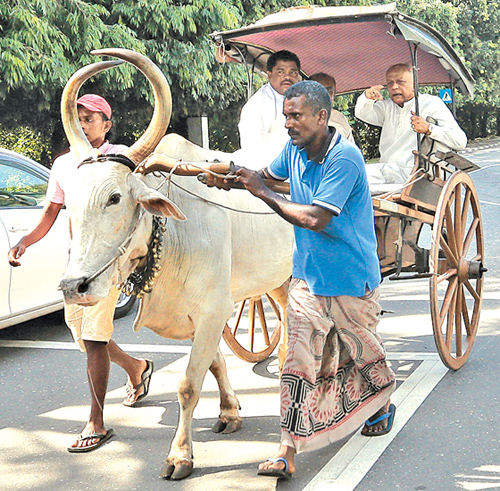 SJB to Parliament in bullock carts

Members of Parliament (MPs) of the Samagi Jana Balawegaya (SJB), the main parliamentary Opposition party, are due to arrive in Parliament today (22) in bullock carts, so as to protest against the Government’s recent decision to increase fuel prices.


As confirmed to The Morning by well-informed sources within the SJB, almost all the MPs representing the party are scheduled to arrive at the Parliamentary Complex in bullock-driven carts.


This appears to be a re-enactment of a similarly flamboyant protest on 9 November 2017 by the then Joint Opposition (JO) in protest over the petrol shortage at the time. Nearly 20 JO members, including then MPs Mahinda Rajapaksa, Namal Rajapaksa, Mahindananda Aluthgamage, Sisira Jayakody, and Rohitha Abeygunawardena, arrived at the Parliamentary Complex on bicycles while then MP and current Leader of the House and Foreign Minister Dinesh Gunawardena arrived in a bullock cart.


Meanwhile, the no confidence motion (NCM) signed by MPs of the SJB against Energy Minister Udaya Gammanpila regarding the decision taken to increase fuel prices, is due to be handed over to Speaker of Parliament Mahinda Yapa Abeywardena today as well.


The NCM was signed by SJB MPs at the office of the Opposition Leader on 16 June. The NCM, as of 16 June, had been signed by the Opposition and SJB Leader Sajith Premadasa; SJB General Secretary Ranjith Madduma Bandara; MPs Tissa Attanayake, Harin Fernando, S.M. Marikkar, Ashok Abeysinghe, Dr. Kavinda Heshan Jayawardhana, Waruna Liyanage, Rauff Hakeem; and several others.

Social distancing in pvt. buses: Only if there’s a fare hike

July 17, 2020 byTSM Web Desk No Comments
Private buses would guarantee social distancing for commuters if they are allowed to hike the fare, The Morning learnt.