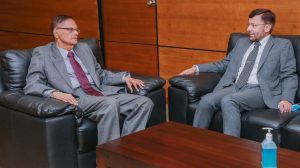 The Pakistan Government is to offer 100 educational scholarships to Sri Lankan students in the coming months in an effort to strengthen the longstanding ties between Pakistan and Sri Lanka.

The decision was announced during a recent meeting held at the Ministry of Education, in which Minister of Education Prof. G.L. Peiris and High Commissioner of Pakistan in Sri Lanka Maj. Gen. (Retd.) Muhammad Saad Khattak participated.

An additional 1,000 scholarships in the higher education sector too will be established in the next five years under the Sri Lanka-Pakistan Foundation, the High Commissioner of Pakistan announced.

Moreover, steps to popularise education in Sri Lanka among Pakistani students were to be considered by the Government of Pakistan, the High Commissioner noted, also suggesting that President Gotabaya Rajapaksa and Prime Minister Mahinda Rajapaksa should focus on reviving Sri Lanka’s tourism industry after the Covid-19 situation, especially among the countries in the Asian region.

Several topics of general interest in mutual co-operation in the field of education were discussed, during which Prof. Peiris and Maj. Gen. Khattak agreed that bilateral co-operation should be maintained in various fields of higher and technical education.

Also, for the first time in Sri Lanka, a Pakistan and Sri Lanka Alumni Day is to be celebrated on 7 October at Shangri-La Hotel, Colombo, to which Prof. Peiris will participate as the Chief Guest.

Prof. Peiris has requested from Maj. Gen. Khattak to take steps to further strengthen co-operation between the two countries in the future by maintaining good relations with the University Grants Commission (UGC).

June 9, 2021 byNews Admin No Comments
In response to the news items created and shared on social media networks to the effect that there are conflicts within the Samagi Jana Balawegaya (SJB) and among parties supporting it, the SJB stated

October 17, 2021 byAazam Ameen No Comments
As tensions in the East China Sea between Taiwan and China have heightened in the recent past with Chinese President Xi Jinping stating that "reunification" with Taiwan "must be fulfilled", Sri Lanka