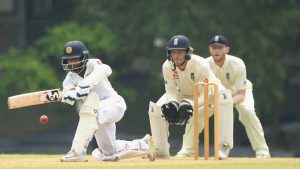 For all the talk of England searching for a “different formula” on this tour there was a familiarity – a wearing familiarity – about their approach on the first day of the red-ball section of their trip to Sri Lanka.

Despite fielding a 14-man team – players came and went throughout the day as they juggled their fielding duties with net sessions and periods out of the sun – there was no place for the only out-and-out quick bowler in the squad (Olly Stone) and no place for their third spinner (the left-armer, Jack Leach). And, while it is unusual to see a different wicketkeeper used each session – they started with Jos Buttler before Ben Foakes took the gloves at lunch and Ollie Pope at tea; all performed tidily – or the second new-ball taken by legspinners, the first three bowlers of the day were all seamers. It was, by and large, pretty much the same approach utilised in Australia and India and the UAE. And we all know how that worked out.

Perhaps little should be read into this. It is likely to that both Stone and Leach will play in the other two-day warm-up match that precedes the Tests and it’s possible that England were keen to prevent this strong Sri Lanka Board side – two of their top four are in the Test squad – from sizing them up ahead of the series.

Still, this was a slightly dispiriting day. Despite rotating eight bowlers, England looked worryingly toothless. The pitch was deathly slow and offered very little to bowlers, but the ease with which the home batsmen prospered – the run-rate was well above four an over for most of the day – was a little reminiscent of the Cricket Australia XI performance on the final day at Townsville a year or so ago. The scoreboard flatters England a little, too. Three of the Sri Lanka Board side’s batsmen retired after reaching fifty.

Perhaps the most impressive of them were Kaushal Silva and Sadeera Samarawickrama. Silva, compact but driving sweetly, skipped to a 74-ball half-century before retiring at the lunch break – he is likely to play in Galle – while Samarawickrama’s half-century took only 55 balls and was reached with a lovely late-cut off Chris Woakes. Ashan Priyanjan and Manoj Sarathchandra also made accomplished fifties. There was hardly an appeal all day and ball rarely beat bat.

If England learned anything, it might have been that part-time spinners are unlikely to be especially effective. Joe Denly’s first over was thrashed for 16, including two sixes heaved down the ground by Angelo Mathews, while Joe Root conceded six an over. Denly also dropped Lahiru Thirimanne off Moeen Ali on 11 – a relatively straightforward chance at wide mid-on – though ended the day on a high with the wicket of Prabath Nissanka, leaving a straight one.

Thirimanne, never as fluent as his opening partner in a stand of 99, eventually edged a drive to slip, while Charith Asalanka followed two silky drives with a slice to backward point. Kamindu Mendis failed to clear the in-field before Mathews’ aggressive innings was ended when he drilled one to cover.

Adil Rashid looked the most dangerous of the bowlers before lunch, but faded a little in the afternoon, while Jimmy Anderson and Moeen Ali were probably the most consistent. Sam Curran was unable to gain much swing from the kookaburra ball, while Stuart Broad could coax little from the surface. The decision to give Denly and Rashid the second new ball appeared to be more about England relieving the burden on the seamers rather than a cunning tactical ploy. England will bat for the entire day on Wednesday.

“It was a tough day,” Moeen said afterwards. “The pitch was slow and dead. Hopefully the wickets spin more in the Test series.

“They scored a bit more than we would like but days like this are more about getting what we need to get out of them.

“Leachy will get his turn in the next game. Personally, I would love to see three spinners in the Test side. It’s great to have the combination of right-arm, left-arm and legspinner.”

Ben Stokes did not bowl for the second game in succession – he didn’t bowl in the T20I, either – but the England management insist he is fine. He was simply rested with a view to the workload expected of him in the series. And it is true, if England play on surfaces like this, they could spend a long, long time in the field.

May 31, 2021 byRevatha No Comments
An Old Anandian and a long-standing benefactor of the National Olympic Committee