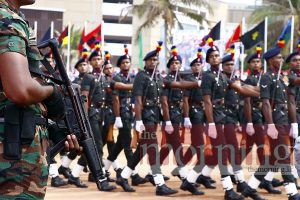 The Sri Lanka army was founded on 10 October 1949 as the Ceylon Army after forming its first regular force under the command of Brigadier R. Sinclair.

With the establishment of its own Military Academy in Diyatalawa, Brigadier Anton Muthukumaru assumed the mantle of office as the first Sri Lankan Commander of the then Ceylon Army.

The Sri Lanka Army has been effectively commanded by 23 Commanders to-date.

August 29, 2021 byAazam Ameen No Comments
Low income families from the Hulftsdorp East Grama Niladhari Division who lost their livelihoods due to the imposition of the quarantine curfew received their Rs. 2,000 allowance provided by the gover

August 23, 2019 byThe Sunday Morning No Comments
Sri Lanka's largest Ferris Wheel will soon make its first spin. The iconic wheel will be part of 'Fantasy Island' which will house a major entertainment area in Battaramulla. Construction work on the