October 4, 2020 by Madhusha Thavapalakumar No Comments 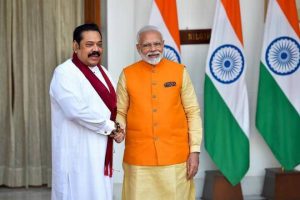 In a bid to gradually revive the shut-down tourism industry, Sri Lanka Tourism is in discussion with the Indian High Commission in Sri Lanka to create a “Corona Corridor” with India, one of the top three tourism-generating markets of the country.

A Corona Corridor or a “Travel Bubble” is an exclusive partnership between countries that have demonstrated considerable success in containing the pandemic within their respective borders. A Corona Corridor allows nationals of each country to travel within the corridor zone.

Sri Lanka Tourism Development Authority (SLTDA) Director General Dhammika Wijesinghe told The Sunday Morning Business last week that the SLTDA had several discussions with the Ambassador of India to Sri Lanka, but the final decision depends on the stance of the local health authorities.

“There are high-end tourists in India who are actually isolated from the rest of the population. We are considering reopening to them, but everything is still under discussion,” Wijesinghe added.

It is notable that these discussions are ongoing while India stands as the second worst affected country from the ongoing pandemic, with over 6 million Covid-19 cases and over 98,000 deaths due to the pandemic as of last week.

In addition, the SLTDA has also held discussions with Australia and New Zealand, which are amongst the top 10 ranked countries in the latest World Survey on Pandemic Control conducted by the YICAI Research Institute in China on 108 countries. Sri Lanka is ranked the second in this index.

However, Wijesinghe stated that discussions with New Zealand and Australia were not successful as the two countries are “not into travel because they consider themselves safer”.

Nevertheless, New Zealand and Australia are planning to create a Corona Corridor in time for Christmas. Moreover, Australia is also planning to create corridors with Japan, South Korea, and the Pacific Islands, including Fiji, which were ranked below Sri Lanka in the YICAI’s research.

On a further note, Wijesinghe stated that discussions are underway to create Corona Corridors with Thailand, another country amongst the top 10 list of YICAI, and with Poland, which has so far managed the pandemic impressively.

Even though, the Corona Corridor, by definition, means travellers who travel within this respective border do not have to go through on-arrival quarantine, Sri Lanka is yet to take a decision as to whether usual quarantine procedures would be applied to these travellers.

Meanwhile, speaking to The Sunday Morning Business, a spokesperson from the Ministry of Tourism stated that the Ministry is planning to permit groups of travellers from selected countries, if local travel agencies come forward to take the responsibility of getting them down. The permit will be given following a discussion with the health authorities.

Sri Lanka’s tourism sector, one amongst the top three foreign exchange-earning sources of the country, came to a complete standstill following the local spread of Covid-19 and a resultant closure of the Bandaranaike International Airport (BIA) for tourists in mid-March. The Government is yet to take a decision on the reopening of the airport for tourists.

Even before the closure of the airport, Sri Lanka was struggling to attract tourists, mainly due to stringent travel restrictions imposed in China in the early weeks of this year to mitigate the spread of the virus. China is one amongst the top five tourism-generating markets of Sri Lanka.

August 16, 2020 byCharindra No Comments
Plans of bringing in a new Excise Act, replacing the existing over 100-year-old Excise Ordinance of the country, has hit a dead end as the World Bank (WB), has terminated its funds.

November 3, 2021 byNews Admin No Comments
Shaw Wallace and Hedges Ltd. (SWH), an associate company of Shaw Wallace Investments PLC (KZOO), by a corporate disclosure dated 1 November has made a mandatory offer to acquire the remaining ordinary