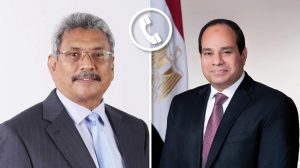 President Gotabaya Rajapaksa and Egyptian President Abdel Fattah Al Sisi have discussed mutual cooperation in all fields, as well as in various international fora, in a telephone conversation yesterday.

“During the cordial conversation, both presidents discussed ways to promote bilateral cooperation between the two countries, the Embassy said.

It further said that President Rajapaksa has expressed pride in the distinguished relations Sri Lanka has always had with Egypt while stressing the importance the country attaches to strengthening bilateral relations in all fields as well as in various international fora.

“This has been prompted by the pioneering role that Egypt plays at the regional and international levels and its valuable role in the field of combating terrorism and achieving security, stability and peace in the Middle East.

“For his part, President Al Sisi affirmed that Egypt welcomes all efforts to intensify cooperation with Sri Lanka in various international fora, especially in light of the historic bilateral relations existing between the two countries.

“During the call, efforts to exchange multifaceted experiences between the two countries were discussed, including combating COVID-19 and strengthening coordination and cooperation on anti-terrorism efforts being one of the main challenges faced by the two countries.

“President Rajapaksa praised Egypt’s efforts to combat terrorism internally and regionally as well as the initiatives taken to counter extremist ideologies. In this respect, the pioneering role of Al-Azhar University of Egypt and its affiliated institutions in combating extremist ideologies and disseminating the enlightened teachings of Islam was further commended,” the Embassy said.

Criminal probe to be launched on Hemasiri Fernando

June 24, 2019 byEaswaran No Comments
The Attorney General (AG) has called for a criminal investigation to be launched on former Defence Secretary Hemasiri Fernando over the Easter Sunday attacks.