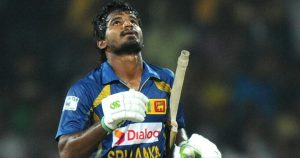 Their omissions have been made owing to either fitness issues or injury reasons. The Sri Lanka ODI and T20I squad for the West Indies consists 20 players while 18 players have been named for the Test squad for West Indies two Tests.

Prominent short-format batsman Avishka Fernando, meanwhile, has also been omitted from the Windies series. Fernando has not undergone his fitness test due to an ankle injury he is suffering.

Meanwhile spin-bowling all-rounder Akila Dananjaya has been included in the limited-over squad for the first time after the International Cricket Council (ICC) lifted a ban on him recently, on suspect bowling action.

Dasun Shanaka has been appointed as the skipper of the Sri Lanka T20 side permanently. Thisara Perera will be a member of the touring T20I and ODI squad for the Windies tour. Dimuth Karunaratne will continue to be the Test and ODI Captain.

Youngster Santhush Gunathilake is another player who has failed his fitness test.

The national selection committee has made the selection for the West Indies white-ball series and the two Tests on Friday (19) yet the names of the Test touring party, which includes 18 players, is yet to be sent for approval of the Sports Ministry.

The selections have been made by a temporary selection committee (reportedly consisting Pramodya Wickramasinghe and Chaminda Mendis) appointed on an ad-hoc basis only for the West Indies tour.

Meanwhile Dilruwan Perera has been dropped from the Test squad while Roshen Fernando has been recalled for the Windies Tests.

Lahiru Thirimanne and Dhananjaya de Silva too have been included in the Test squad subject to passing their next fitness tests.

Sri Lanka white-ball squad is to leave Sri Lanka for Antigua on Tuesday (23).

(Please read our Sunday Morning print edition sports-page lead story on Sunday, 21 February for further details. Please note that fast bowler Asitha Fernando has NOT been dropped but is featuring in both Test and limited-over squads)

June 5, 2019 byRandev No Comments
Sri Lanka denied Afghanistan a famous victory by winning a low-scoring thriller in the World Cup at Cardiff.

Founder of the Bolling Swimming Academy passes away