SL fined for slow over rate against NZ 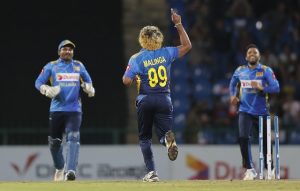 Sri Lanka has been fined for maintaining a slow over-rate against New Zealand in the first T20I in Pallekele on Sunday, the International Cricket Council said.

Andy Pycroft of the Emirates ICC Elite Panel of Match Referees imposed a fine of 40 per cent of their match fee on all 11 Sri Lanka players after Lasith Malinga’s side was ruled to be two overs short of its target after time allowances were taken into consideration.

In accordance with Article 2.22 of the ICC Code of Conduct for Players and Player Support Personnel, which relates to minor over-rate offences, all players are fined 20 per cent of their match fee for every over their side fails to bowl in the allotted time.

Malinga pleaded guilty to the offence after the end of the match and accepted the proposed sanction, so there was no need for a formal hearing.

October 29, 2021 byRevatha No Comments
They shaped the history of sports

November 17, 2022 byNews Admin No Comments
A team of three shooters is representing Sri Lanka at the ongoing 15th Asian Airgun Championship, being held in Daegu, South Korea, which commenced on 9 November and will end this Saturday (19). Sri L