Fresh from a 3-0 win in the One-day International series against Bangladesh, hosts Sri Lanka will look to translate that form to the longest format when they face New Zealand in the first of a two-Test series, beginning on 14 August in Galle.

This time, in spin-friendly conditions, Dimuth Karunaratne’s men will be confident of taking the lead

When they toured New Zealand in December 2018, Sri Lanka showed immense grit and resistance to save the first Test, but were outplayed in the second, losing by 423 runs – their heaviest defeat ever in terms of runs. However, this time, in spin-friendly conditions, Dimuth Karunaratne’s men will be confident of taking the lead.

New Zealand have won five successive Test series since December 2017, but are yet to win a series in Sri Lanka since they first toured in 1984. Furthermore, the visitors couldn’t get much match practice, with only 65.5 overs of play possible in the rain-affected warm-up game against Sri Lanka Board President’s XI.

In that time, however, Ajaz Patel, the left-arm spinner, was able to make a strong case for himself with returns of 5/41 in his 10-over spell. 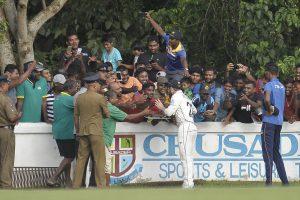 NZ have won five successive Test series since December 2017 under Kane Williamson, seen above having a birthday cake with Lankan fans at Katunayake during their only warm-up game, abandoned after its first day due to rain last week

In December 2018, after the first Test in Wellington ended in a draw, Sri Lanka’s new-ball pair of Suranga Lakmal and Lahiru Kumara ran through New Zealand to bundle them out for 178 in the first innings. However, Trent Boult returned the favour, picking 6/30 as Sri Lanka managed just 104, conceding a 74-run lead.

Then, daddy hundreds from Tom Latham (176) and Henry Nicholls (162) extended New Zealand’s lead further to 659 as the hosts posted 585/4 in their second innings. Boult, Tim Southee and Neil Wagner then shared nine wickets to bowl Sri Lanka out for 236 for a thumping 423-run win.

Dimuth Karunaratne, Sri Lanka Captain: “This is the time we have to bring some youngsters for the next couple of years. We’ve had an issue recently, where we didn’t have that strong bench. But players are now ready, and they’ll grab the chances that come their way. You need a lot of players to build up that competition within a team, so that players are constantly putting pressure on each other to perform.”

Gary Stead, New Zealand Coach: “The thing that impressed me most about this team is their ability to adapt quickly to situations. When you consider playing at Abu Dhabi or Colombo, [and] then New Zealand conditions, your players must adjust quickly, and that’s the real strength of this team. It’s led by Kane (Williamson), and he’s led from the front in terms of how we go about doing that.”

There will be a cloud cover throughout, with high chances of rain on the opening day. Galle has traditionally been a spin-friendly wicket, and batting gets difficult as the game progresses. Teams batting first have won the last seven Tests played here.

FACTS: Rugby Championship, SANZAAR, and Bledisole Cup… What are they?

August 13, 2021 byRevatha No Comments
In case, our rugby fans do not know