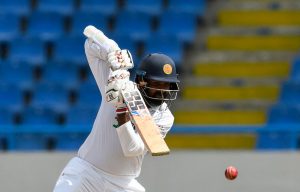 Sri Lanka were 250/8 in 103.1 overs as bad weather halted third day’s play early in the second Test in Antigua on Wednesday (31 March). West Indies were all out for 354 in their first innings on Tuesday, the second day of the Test.

In a day hampered by a couple of intermittent rain interruptions on Wednesday, Sri Lanka lost wickets in tandem with only their No. 6 batsman Pathum Nissanka, who made a debut century in the previous Test match at the same venue, remaining not out at the crease with another solid knock of 49 not out in 119 balls. On the other end not out is Lasith Embuldeniya. The Lankans still trail the West Indies by 104 runs.

Sri Lanka resumed from 136/3 in 61 overs on Wednesday but they lost their two overnight batsmen, Dinesh Chandimal and Dhananjaya de Silva, for 44 and 39 runs respectively. Niroshan Dickwella got out thereafter for 21, leaving only Nissanka to bat through the end with the tail-enders.

The first Test ended in a draw at the same venue in favour of Sri Lanka.

May 7, 2021 byRevatha No Comments
Some of the leading sporting news from the globe