Official food inflation stood at 57.4% in May 2022, the highest ever year-on-year food prices ever recorded since 2004.

Advocata Institute’s Bath Curry Indicator (BCI), which tracks changes in the retail price of food, also recorded its highest ever increase of 71% from May 2021 to May 2022 and an increase of 13% over the past month. 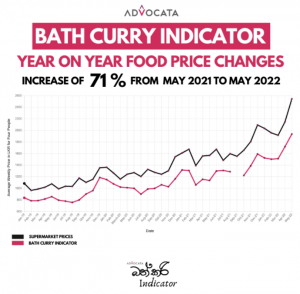 The Colombo Consumer Price index (CCPI) that looks at overall inflation, stood at 39% in May 2022. This is the highest inflation rate recorded for the past 70 years. 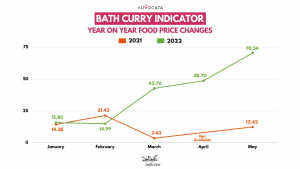 Advocata Institute academic programme Chair Dr Sarath Rajapatirana stated: “Inflation is an insidious and cruel tax. And, inflation of food is very harmful as it strikes the most vulnerable – children and old people. One other problem not often highlighted in most discussions on the subject is that it distorts relative prices, creating a misallocation of resources.”

The BCI tracks the weekly retail prices in the Colombo market of the most commonly consumed food ingredients that might be used in a typical Buth curry meal. The prices are collected from the weekly indicators published by the Central Bank.

Advocata is an independent policy think tank based in Colombo, Sri Lanka, that conducts research, provides commentary and holds events to promote sound policy ideas compatible with a free society in Sri Lanka.

Thilini Priyamali scam: Web of victims to be questioned

October 16, 2022 byNews Admin No Comments
Investigators inquiring into the alleged frauds conducted by Thilini Priyamali of Thico Group at the World Trade Center (WTC) in Colombo are likely to begin recording statements from more victims as d

August 21, 2021 byNews Admin No Comments
The Government has not yet decided on convening a meeting of leaders of political parties represented in Parliament, The Sunday Morning learnt.