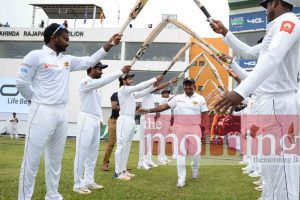 England set Sri Lanka an improbable target of 462 runs in just over two days in the first Test between the two countries in Galle on Thursday, 8 November.

The hosts were 15 without loss in seven overs in their second-innings at stumps on day three.

England scored 322 for six declared in their second-innings with Keaton Jennings making an unbeaten 146 top-scoring for the tourists.

He shares the eighth-place with England’s Chris Broad, with 433 scalps.

August 16, 2018 byRevatha No Comments
A strong contingent of 177 athletes plus 78 officials will be there representing Sri Lanka at the 18th Asian Games that will begin on Saturday, August 18.