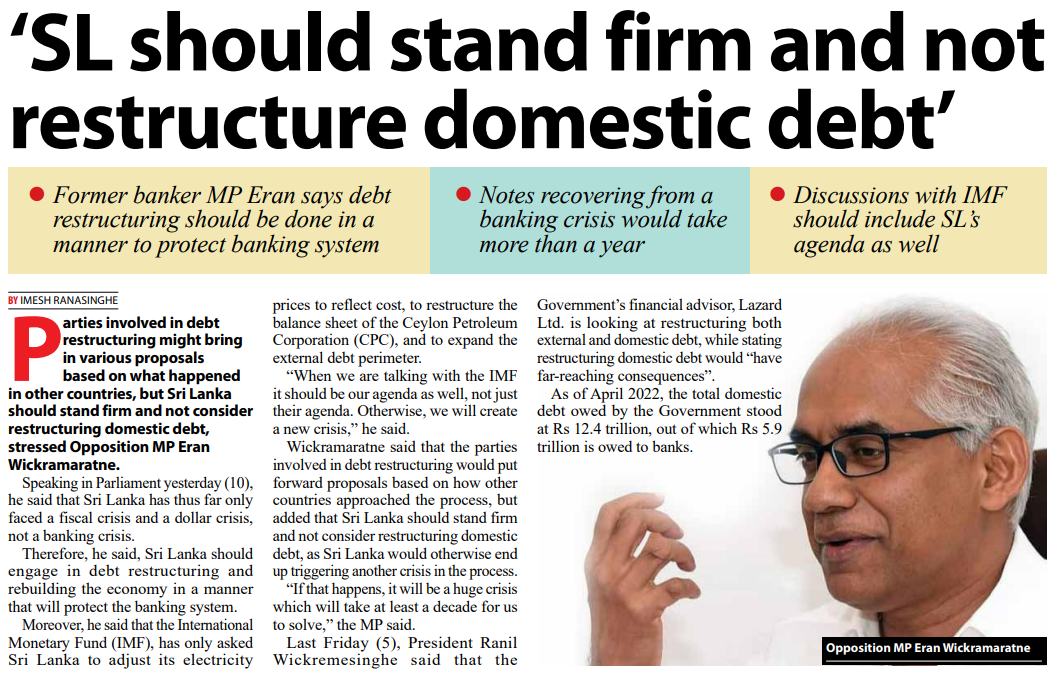 ‘SL should stand firm and not restructure domestic debt’

Parties involved in debt restructuring might bring in various proposals based on what happened in other countries, but Sri Lanka should stand firm and not consider restructuring domestic debt, stressed Opposition MP Eran Wickramaratne.

Speaking in Parliament yesterday (10), he said that Sri Lanka has thus far only faced a fiscal crisis and a dollar crisis, not a banking crisis.

Therefore, he said, Sri Lanka should engage in debt restructuring and rebuilding the economy in a manner that will protect the banking system.

Moreover, he said that the International Monetary Fund (IMF), has only asked Sri Lanka to adjust its electricity prices to reflect cost, to restructure the balance sheet of the Ceylon Petroleum Corporation (CPC), and to expand the external debt perimeter.

“When we are talking with the IMF it should be our agenda as well, not just their agenda. Otherwise, we will create a new crisis,” he said.

Wickramaratne said that the parties involved in debt restructuring would put forward proposals based on how other countries approached the process, but added that Sri Lanka should stand firm and not consider restructuring domestic debt, as Sri Lanka would otherwise end up triggering another crisis in the process.

“If that happens, it will be a huge crisis which will take at least a decade for us to solve,” the MP said.

As of April 2022, the total domestic debt owed by the Government stood at Rs 12.4 trillion, out of which Rs 5.9 trillion is owed to banks.