SL tour of Pakistan to go ahead as planned – SLC 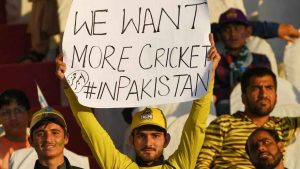 Sri Lanka Cricket announced that the forthcoming Sri Lanka National Team’s tour of Pakistan will go ahead as planned, following assurances given by the Government of Pakistan that it will provide maximum security arrangements for the team during their entire duration of stay in Pakistan.

Furthermore, the Major General (Rtd.) J. R. Kulathunga, National Intelligence Head, on behalf of the Secretary of the Ministry of Defense of Sri Lanka, confirmed that no information has been received by the Ministry of Defence through any Intelligence Agency indicating a threat to the Sri Lanka National Team or to the said tour, SLC said in a media communique on Thursday.

It also said, no information has been received by the High Commission of Sri Lanka in Pakistan, indicating a threat to the Sri Lanka National Team or to the said tour.

The Government of Pakistan in a letter sent to the SLC via the Ministry of Telecommunications, Foreign Employment and Sport of Sri Lanka has assured the followings:

Accordingly, Sri Lanka tour of Pakistan 2019, will proceed as approved at the SLC Executive Committee meetings held on 22 August and 16 September 2019.

YOU CAN WITNESS GALLE TEST NOW

November 24, 2021 byRevatha No Comments
SLC allows 50% of spectators to fill in at Galle

December 20, 2020 byNethmi Liyanapathirana No Comments
Sri Lanka is one of the few countries in the world celebrating cricket. We have a great history for cricket that goes past a century. 17th of March 1996 was the day where the cricket world turned..