The four-day game of the Sri Lanka versus Bangladesh ‘A’ came to an end today in a draw at the MRICS, Hambantota. 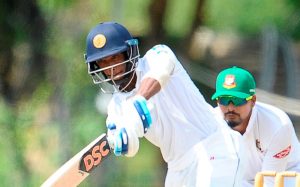 Sri Lanka, batting first, made 268 all out in their first innings. Hehidy Hasan Mirza took an impressive 7/84.

In response, Bangladesh ‘A’ scored 330 all out with Mominul Haque contributing with 117 runs while Shadam Islam made 77. Mohammed Shiraz of Sri Lanka ‘A’ captured five for 63 runs.

In their second innings, Sri Lanka made a solid 357/2 by the close of the match. Opener Pathum Nissanka hit 192 runs before being run out. Sangeeth Cooray struck 89 while Kamindu Mendis hit 67 not out.

The first ‘Test’ in the series also ended in a draw on 1 October. The three-match unofficial ODI series between the two teams will be held on 9, 10 (in Hambntota), and 12 October (at R. Premadasa, Colombo).

Yupun – Third among the best