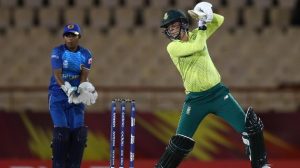 Marizanne Kapp punches one on the off side

Fast bowlers Shabnim Ismail and Marizanne Kapp put up what captain Dane van Niekerk described as a “pace clinic” as South Africa opened their tournament with a seven-wicket win against Sri Lanka. The quick-bowling duo sent down three overs each in the Powerplay after Sri Lanka were put in, conceding only 16 runs during that period and grabbing a wicket each, before Ismail picked up two more in the last over to restrict Sri Lanka to 99 for 8. In all, the pair bowled 37 dot balls and had combined figures of 4 for 23 in eight overs. Kapp then played a stable innings at No. 3 to anchor South Africa’s chase with van Niekerk.

South Africa’s decision to bowl was informed by the conditions in the evening. Rain had influenced most of the day at Gros Islet, to the extent that the boundaries had to be brought in – to roughly around 55 metres – at the start of the previous game because large parts out the outfield had been beyond repair. The team that batted first would have had to get through the challenge of a soaked outfield, aside from the uncertainties of the DLS.

Unfortunately for Sri Lanka, they were that team, and on a damp pitch, they found it nearly impossible to get runs off Ismail and Kapp. Ismail was fast, clocking close to 120kph on average, and got past opener Yasoda Mendis’ inside edge a few times before finally finding the top of middle stump. That followed a testing previous over from the other end, where Mendis was squared up a few times by Kapp’s outswingers that began from middle stump. The defining moment of that over, however, was Kapp’s inswinger that had trapped the left-handed Chamari Atapattu on the drive.

With Atapattu, their captain and most destructive batsman, out early in difficult conditions, Sri Lanka’s top order was trapped between trying to score quickly and laying a foundation. This was evident through the Powerplay and for some time after, with batsmen playing out dot balls as South Africa refused to spread the field, and then running down the pitch and heaving at balls to try and make up. Number 3 Hasini Perera was out this way, getting a thick outside edge to third man as she looked to clear the infield, as was No. 4 Shashikala Siriwardene, the former captain, who simply yorked herself by stepping out against Tumi Sekhukhune.

Perera and Siriwardene were Sri Lanka’s most comfortable batsmen from the top order and will have rued their dismissals, considering that South Africa began to gift runs towards in the second half of the innings. Several run-out opportunities were missed, three of them involving stand-in wicketkeeper Lizelle Lee, and fumbles in the field added to Niekerk’s openly visible frustration at the extras that had also started seeping in. By the end of the innings, South Africa had bowled 24. But Sri Lanka didn’t have the resources to double down during that stage, and No. 8 batsman Dilani Manodara’s unbeaten 12-ball 20 was all they could be content with.

The conditions were still there for their seamers to mount a challenge, though. Left-armer Udeshika Prabodhani got so much swing into South Africa’s right handers, in fact, that she had to switch to around the wicket in the first over to stop herself from straying down. The reward was instant, as she hooped one past Laura Wolvaardt’s inside edge to knock out her stumps. Off the very next ball, Lee went chasing a full one from Sripali Weerakkody based on a wide-of-the crease release, but was out nicking when the ball swung away late. At 6 for 2, South Africa had to reassess what had seemed like a small chase.

It could have been a lot worse. In the fifth over, Prabhodani got Kapp to inside-edge an inswinging yorker, and the ball deflected onto the outside part of the off stump. She had begun celebrating because the bails had lit up, only to see that neither of them had fallen. South Africa had only got 26 at that point.

That would be the last chance South Africa offered. Kapp and Niekerk played through the next few overs and as the ball showed less and less assistance for the seamers, they began opening up. Just before the halfway stage, South Africa were managing to stay only marginally ahead of the DLS par, but Kapp’s slogged six over long-on off Oshadi Ranasinghe eased the pressure in the ninth over. From there, it was a game of nudging from the batsmen and using their feet to open up parts of the field, and South Africa did exactly that to finish in calm fashion.

Pramodya answers his critics – Somebody had to make that move

May 28, 2021 byRevatha No Comments
Chief of cricket selectors speaks to The Morning