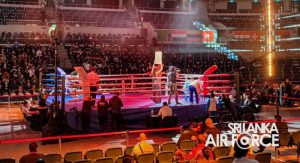 A statement from Sri Lanka Air Force notes that her victory marks a historical milestone as it is the first time a Sri Lankan female pugilist has made it to the podium in such a mega boxing event.

The Commander of the Air Force, Air Marshal Sudarshana Pathirana extended his heartiest congratulations to the Air Force Boxer who has brought glory and honour to the Sri Lanka Air Force and the country at an international sporting platform.

September 11, 2019 byEaswaran No Comments
The Core Group on Sri Lanka reminded Sri Lanka on its commitment to implement the Resolution on Sri Lanka which was passed by the UN Human Rights Council (UNHRC) in Geneva.

February 12, 2021 byNews Admin No Comments
No date has been set for the tabling of the final report of the Presidential Commission of Inquiry (PCoI) appointed to investigate the Easter Sunday attacks of 21 April 2019, in Parliament..