SLBFE to cut down expenses 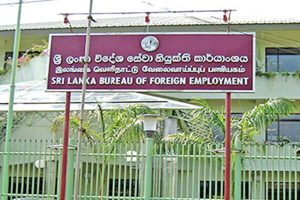 The Sri Lanka Bureau of Foreign Employment (SLBFE) has decided to cut down on expenses of their foreign missions as a measure to support the Government which is currently going through economic crises as a result of Covid-19.

Speaking to The Morning, SLBFE Acting General Manager W.M.V. Wansekera said that measures had already been taken by the Bureau to reduce additional expenses of the staff, like travelling and other expenses.

When asked about the millions of rupees spent by the previous Government for welfare workers, he denied to comment, saying it was what the Subject Minister had told. However, he added that the statement should be amended as the payment of around Rs. 900 million has been spent for all expenses including medical, repatriation, travelling, and salaries; not to pay only the salaries.

Minister of Labour Nimal Siripala de Silva recently said that the SLBFE employees working at foreign missions should be repatriated, as around 120 employees currently staying in different countries are without work due to the coronavirus.

Further, he said the SLBFE is spending over Rs. 970 million to maintain these employees per year and since the SLBFE is currently facing financial difficulties, the additional expenses should be cut down.

It is also learnt that Prime Minister's Secreta