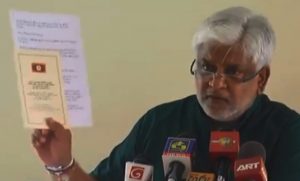 “The President in his Independence Day speech on Tuesday (4 February) emphasised his government has given media full freedom. But the SLC has banned one journalist (Pathum Wijeratne of ‘Ada’ newspaper published by Wijeya Newspapers Ltd.) from entering its premises. That is because he has revealed their corrupt deals. The present SLC is above even the President,” Ranatunga told media on Thursday, 6 February at his Nugegoda residence.

He also blamed SLC for the deteriorating standard of the national school cricket structure which he says is behind even that of Bangladesh.

He also accused leading SLC officials for deriving massive monthly salaries at a time when the President has instructed to curtail salaries of leading officials of all government institutions.

October 24, 2018 byMalik No Comments
Cristiano Ronaldo marked his return to Old Trafford with a win as his Juventus side outclassed Manchester United to move five points clear at the top of Champions League Group H.