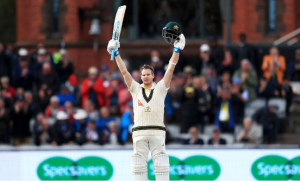 Australia’s captain Tim Paine insists that it will take an awful lot for him ever to send an opposition side into bat after twice seeing his men struggle against England when he did so at Lord’s and The Oval.

Perhaps this is just as well, because his talismanic No. 4 Steven Smith becomes a far more human batsman whenever he does not get the chance to bat first.

Smith has long complained of sleeping poorly during a Test match, as his brain goes into visualisation overdrive and he struggles to switch off and then nod off. But there is strong statistical evidence to suggest that Smith’s fraught sleep patterns contribute to a deterioration of his performance across the four innings of a Test.

In the first innings of a Test, Smith averages a truly Bradmanesque 93.64 from 39 innings, and has scored 16 of his 26 hundreds there. In the second, this drops to 63.67 from 29 innings with six centuries, and then 51.68 from 36 innings with four centuries in the third. Worst of all is the fourth, where Smith averages just 30.68 from 21 innings and has never reached three figures.

Put in the context of his lack of sleep across a match, this is unsurprising. Take Smith’s admission after the most recent day-night Test at Adelaide Oval, the Ashes Test in late 2017, where England fought back into the game after Smith declined to enforce the follow-on as captain: “I had to have a sleeping pill last night. It has been a pretty tough 24 hours if I’m being honest, it’s all part of being captain of your country, you have to make difficult decisions and sometimes you’re going to make the wrong decision.”

Members of the Australian set-up have recalled how drained and washed out Smith was to look in the aftermath of the Perth Test, where the Ashes were retained later in December. The following March, of course, the Newlands scandal occurred, ruling Smith out of captaincy and sleepless Test match nights for the next 12 months. Before his return to Test cricket in England this year, Smith spoke again about his sleeping troubles.

“I am an awful sleeper. In Test matches, I reckon I average 15 to 20 hours throughout the whole five days,” Smith told Sky Sports before the Edgbaston Test. “It’s all positive stuff – who’s bowling at me, where I am going to hit them, how I’m going to play, where I’m going to look to score. I don’t very often get many of those negative thoughts. When I do, I shut them out pretty quickly.”

More recently, Smith has spoken of the various methods he is using to try to improve his sleep in a game, particularly using a rain sounds app on his phone to simulate the gentle patter of raindrops and help quieten his active mind. For Paine, there is an acknowledgement that Smith’s brain is part of what makes him one of the greatest batsmen the world has ever seen, but also an area where, the older and more mature he gets, improvement can still come.

“That is just how he is, but at the same time I know he’s working with people at Cricket Australia and elsewhere on trying to find a better night’s sleep,” Paine said. “It’s not a great endorsement for his Koala mattress company, but he’s working on trying to get better at that and trying to relax a bit more during games. But he performs in first innings, which all good players want to be able to do when the game’s up for grabs, and big first innings runs more often than not will win you Test matches or certainly put you well in front of the game.

“If you asked him would he rather score his runs in the first or the second innings he’s going to take the first every day of the week and his record is second to none. He’s plugging away at trying to get a better nights’ sleep, but I don’t think it’s an easy fix for someone who’s wired the way Steve is.”

Something Paine noted about sleeping habits was the fact that fatherhood can provide a great simplifier. “I sleep okay, the bed in Adelaide’s a bit soft, but I’m a pretty good sleeper I must admit,” he said. “It’s changed a bit since I’ve had children, I’m up a bit earlier these days, so I tend to crash a bit earlier as well.”

Sleep or no sleep, Paine has his own issue to address in Adelaide this week – that of backing up after a victory. Two of Australia’s six Test wins under his captaincy so far have been followed by defeats in the next match, with the Lord’s draw also an uncomfortable result. Only once, against Sri Lanka in January and February, were two wins strung together.

“I wouldn’t say we’ve had a problem with it, I’d say we haven’t won a lot of cricket games over the last 18 months,” Paine said. “But as I’ve touched on before Brisbane, now we’ve got a team together, we’re turning up to Test matches expecting to win, whereas in the last 18 months it was probably a bit unsure and I think most teams would be the same had you taken their two best players out.

“Now we’ve got some consistency around our group, but we were certainly disappointed with the way we played the fifth Test [in England] and one of the things we’ve spoken about as a group since that is we’ve called it ‘winning after winning’, making sure we can back up a performance which we were really happy with last week, but coming to Adelaide now knowing that last week’s performance means nothing and we have to be at our best again starting tomorrow afternoon.”

A well-rested and relaxed Steven Smith will go a long way towards ensuring Australia start to pile the wins up into a longer sequence, particularly in terms of winning games where they haven’t made the perfect start to proceedings.espncricinfo

May 5, 2021 byRevatha No Comments
Hypnotherapy is not much talked-about subject in sports